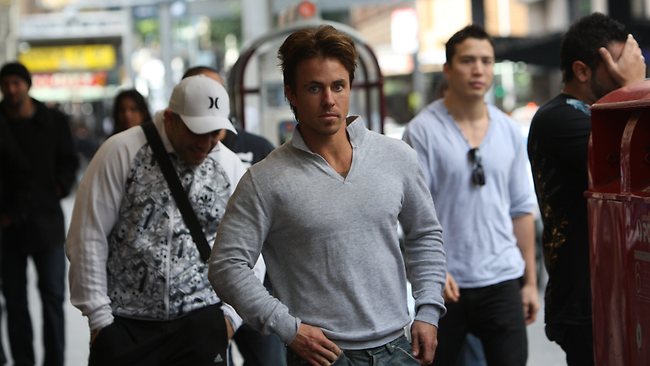 Freeman, who fled to Thailand, after being linked to a lab which produced 19.5 kg of ecstasy seized by police in Australia last December, handed himself in by prior agreement at the Australian Embassy in Sathorn Road, Bangkok.

A Sydney ‘businessman’ and nightclub owner, Freeman has long associations with Thailand. Shortly after his departure from Australia  he was reported to have been joined in Hua Hin by Australian-Moroccan model Dominique Le Toullec.

Adam Freeman and his brother, together with fourteen other close friends, each have matching Thai body  tattoos reading ‘ pichay’  –  brother. The two brothers also have ‘George’ tattooed on their wrists.

Their father , a crime boss from the 60s to 80s, featured in a documentary ‘Underbelly’. But in a recent interview in the Sydney Telegraph Adam said: ‘Back then, an underworld figure was a different thing. He was a businessman, our Dad. He never got involved in everything else.”

In the same interview he declined to comment on whether his father ordered the murder of his own bodyguard Chris ‘Rent-a-Kill’  Flannery.

Freeman was reported to have been escorted to Suvarnabhumi International airport and boarded a Sydney bound Quantas flight which departed at 17.15. But airline staff could not confirm.  In Sydney newspapers have reported that his fingerprints were found on drug manufacturing equipment.