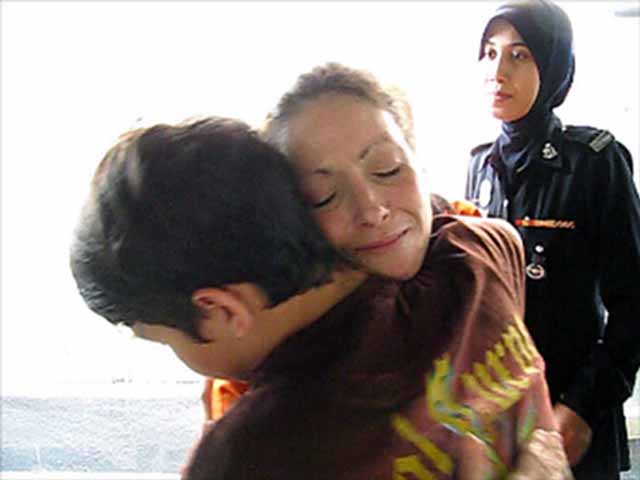 It went almost unnoticed but the decision last Sunday by a judge in the predominantly islamic state Terengganu state of Malaysia to sentence Shivaun Orton to just 14 months in jail has delighted not only her family and friends but also the top executive of a major US oil company.

Shivaun Orton was arrested last December in what the Malaysian Terengganu State Narcotics CID claimed was the biggest drugs bust in years. Months later the claim of a suspected haul of 225 grams of heroin – meriting the mandatory death penalty – was reduced to less than 15 grams. Then last weekend after a plea bargain Shivaun was sentenced to just 14 months.

Shivaun with her youngest son when the situation seemed desperate
Was it diplomacy or the intervention of the charity ‘Reprieve’?  Did the Terengganu Narcotics CID screw up, or was Malaysia sensitive to the possible political outcry, we may never know.

One person who initially did not believe the news was the Head of the Terengganu Narcotics CID himself Roslan Abdul Wahib.

‘It’s not possible,’ he said, after commenting that under Malaysian law Shivaun should have received 30 years jail and a whipping for possessing five cannabis plants alone.

But to Juan Camacho, across the world in Columbia, it was a ‘stupendous’ result. ‘It’s just great news,’ he said.

Juan (left) in Malaysia with fellow oil workers
Mr. Camacho admitted that he ‘fell in love’ with Shivaun Orton when he met her at the Ranting Resort in Cherating that she ran with her husband Abdul Harris Fadilah.

He said he offered to help her escape from a life in which she was forced to live as a Muslim wife in Malaysia’s strictly Islamic Terengganu state, and beaten by her husband; but a tearful Shivaun declined for the sake of her children.

The love affair was never consummated but, when her husband Abdul Harris Badilah found out about the relationship, the American oilman said he was run out of town with a death threat hanging over his head.

Camacho contacted me after I visited Shivaun and she told a horrific story about how she had once fled and tried to get a plane out of Malaysia. She was stopped and raped by police at Bentong in Pahang State, she claimed, after her husband told her she was a Russian prostitute who owed him oney.

Shivaun Orton a the first court heating. Her husband Abdul Harris Fadilah is behind, on her left is her eldest son’s girlfriend
Juan Camacho, now happily married with a family of his own, was working for an oil service company in Peninsular Malaysia in 2006 and was based at the Awana Kijal Resort, just north of the Malaysian town of Kemaman, with several co-workers.

Shivaun used to commute from Kemaman in the strictly Islamic state of Terengganu to help her husband run the Ranting Resort at Cherating, in the more relaxed Pahang State. She had helped buy the resort with cash she earned in the United States.

‘During the weekends we would cruise Cherating and found some very nice places to hang out. I started going to Shivaun’s place because it was awesome to be having a beer by the beach as well as seeing her behind the bar. I completely fell in love with her but was very cautious about her husband.

‘One day I remember her husband had a Malaysian family member return from Spain. He spoke fluent Spanish with a Madrid accent. He told us in Spanish that he had made a fortune in Madrid dealing in drugs and that he planned to do the same in Malaysia with the help of Shivaun’s husband.

‘I remember his face like it was yesterday..Anyway I kept going to the bar for two or three more weekends with my friend Orlando Molina. I was very worried about her husband’s business but I just wanted to see her. I was in love with her though nothing physical ever happened. It was just looks and smiles and I would love just to stare at her.

‘I remember the husband being abusive, yelling at her, pushing her around. It made me very angry!  The last night I went there I started talking to her because her husband was not around. I told her to leave him,  that I could help her escape, but she refused to leave her kids behind.

‘After we spoke I followed her to the bathroom and inside we kissed for a few minutes. Up until that moment the best kisses of my life.

‘Unfortunately her youngest son saw us coming out of the bathroom and told his dad. His father then called my work several times threatening to have me fired by Petronas. (Petronas is Malayia’s national oil company to which Camacho’s company was subcontracted)
‘Two days after I received his call Shivaun called me to leave saying he was going to have me killed. She was crying and told me that she could not call me before because she was tied to her bed at home and her husband had beaten her up.

‘Shivaun was so beautiful, nothing like the pictures you see of her in the papers these days.’

He is currently the Director of Contracts in North, Central and South America for a large oil service company.

After the death threats he was transferred by his company to Labuan, an island of the coast of Sabah in North Borneo.

We keep in touch and he asked if there was anything he could to do help Shivaun.  As it transpired she did not need his help.

Carol Dahn, a Malaysian lawyer, who now lives in London said: ‘I lived at Cherating at the same time as Shivaun.  She stayed very much at the Ranting Resort where they had a beach bar called ‘Rhanapippin’.  Her husband went out he went by himself, so she never went to music bars like the ‘Little Bali’ where he had a lot of friends.

‘Her story is very believable. But her complaints against the Pahang Police will get nowhere. A lot of people left Cherating because it was becoming associated with drugs dealers and not such a nice place to stay.

‘Her husband obviously upset someone, hence the tip off. A lot of people who know Shivaun are angry she is taking the blame for this.’

Normally foreigners convicted of offences in Malaysia are deported. Currently it is not clear whether Shivaun Orton will be able to return to Wales with her two sons, American born and U.S. citizen Jacob,17, and Malaysian born Isaac, 15.

There may be custody issues. But in a short time they will be able to travel to the Britain of their own free will.

The Support Shivaun Orton website reports that a lot of work has still to be done: ‘Most of the help will come from the immediate family who have been alongside her for years – the foreign office will speak to her next week to start her thinking and planning what she wants to do next – there are many issues to consider and Dad is not here to give the support he always gave – that in itself will bring great distress as we know.’

While the claims that the family have been alongside Shivaun for many years are somewhat exaggerated, one thing for sure is that Shivaun will know that she is an extremely lucky woman. She should be home by September.

In the Eighties and Nineties I covered a series of drugs trials which ended with all but one of the foreign defendants being hanged in Pudu Prison, Kuala Lumpur  (now a museum).
Right: Her home in Kemaman. Not exactly a drug lord’s lair.
Pictures: Andrew Chant/Andrew Drummond
Link: Facing the long drop