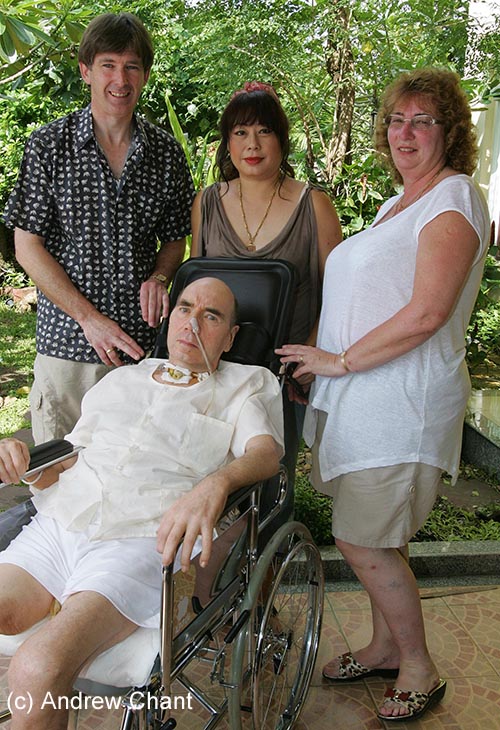 Allan Hyne with nephew David, Thai wife Dtim and Dorothy
A Scots engineer who was given up for dead by his son and daughter after being paralysed and sent into a coma by an oriental bug has uttered his first words in Bangkok after 15 months.
And stubborn and spirited Allan Hyne came back to earth with a bump as he spelt out the traditional four letter Scots exclamation ‘GTF’ – before bursting into laughter.

Here on the outskirts of Bangkok his 47-yr-old nephew David and partner Dorothy, 53, from Newport, Fife, were stunned to find last week that Allan was a fighter.

‘I remember my uncle saying after seeing a story about somebody on life support. ‘Look if that happens to me, just pull the plug.’

‘But he is living proof that people can fight back’
Hyne, chief engineer for Grampian Foods chicken processing factory in Bangkok, was struck down with Japanese encephalitis 15 months ago shortly after taking retirement.

He was totally paralysed but has been nursed back to life by his partner Patcharawadee Oogrit, 54, better known as Dtim, since his insurance ran out nine months ago.

Dtim – a fellow engineer at Grampian Foods in Bangkok – said she was stunned to receive a letter from Allan’s son in Scotland suggesting she let nature take its course. The letter was written before Allan Hyne had shown any signs of recovery.

Doctors at Ake Pathum hospital in Pathum Thani refused to take Allan Hyne off life support.  Dr. Naratipong Sangtong said: ‘There was much too activity in his brain for us to allow that to happen.

‘Some people can continue to recover from this.’

Allan Hyne was first discharged from hospital at the end of February when it was clear he was beginning to understand what people were saying, and last week he showed he could communicate back. His Thai ‘wife’ Dtim had trained as a nurse for a month set up a treatment room in their home and now sleeps beside him every night, holding his hand for hours on end.

But due to a family rift cash is running out and the family in Scotland, says Dtim, have been refusing to answer phone calls.

Happier days. Allan Hyne centre with Dawn and Allan junior
Said Dorothy:  ‘I guess it’s because Dtim is Thai and the family just do not want to give her any cash. But what she has done for Allan has been nothing short of amazing. She has been an absolute angel.

‘Dtim has refused to tell Allan that his family in Scotland is not helping.

Allan Hyne communicating using alphabet board
‘Allan communicates by using a pointer and an alphabet board. It’s a bit hit and miss because his hand is a little unsteady and he gets tired, but he is getting better all the time. When he wants something he will spell it out like ‘Specs’ for his glasses and ‘Scores’ for the football results. He is a Dundee United supporter.  He has also spelled out Dtim’s name and looked at me with a smile.

‘But the biggest surprise was when we first got here and the private nurse was fussing over him to his annoyance.  He spelled out G.T.F. I looked at him and said ‘I hope that’s not what I think you are saying and he laughed and nodded’.

Added David said:  ‘I was talking to him last night. He has an artificial leg. He lost his right leg in a motorcycle accident when he was young.  I asked him if he wanted his leg and he nodded ‘Yes’
‘When I came down this morning he gestured for me to get his legs. I brought them to him but I said he could not try them on yet.  Then I discovered a message the nurse had written down from him overnight. It said: ‘IWANEWAFORMYBIRTH’.  I think it may mean he wants to walk for his birthday.’

Allan Hyne is comfortably well off and has several pensions. He is still legally married to June Hyne, 63, from Dundee, the mother of his children Allan, 43, a Buckie distillery worker and Dawn, 42.

But his relationship with his wife ended over 25 years ago and he later found a new partner in Marion Martin in Buckie. He and Marion lived together. But she did not move to Thailand only visiting a couple of times.  The relationship ended after Allan moved in with Dtim but they remained friends.

In Thailand Allan Hyne shares a house with Dtim on which they have a joint mortgage. Dtim has already sold the family BMW to pay for the hospital bills and sold her office and closed down her own engineering consultancy while she tends to Allan Hyne with a full time nurse.

‘What can I do? I love Allan and have done for seven years and I will look after him. But we do not have a joint income anymore and none of the family in Scotland will release any funds. I do not want their money, I just want Allan’s money to be released for his treatment.’

Earlier this year Allan’s daughter Dawn told STV that her father was in a pauper’s hospital.  ‘It’s horrible. His family is in Scotland but he is stuck in Thailand. He has nobody. It is so sad.’

She made no reference to Dtim, whom both Allan and her and their mother had met at a wedding of Allan’s grandson in Mexico two years ago.

However son Allan Hyne later said ‘He is not married to this woman. He did live with her in Thailand but he is still married to my mother.’

Said nephew David Roberts: ‘I just hope everybody comes to their senses and does everything now for the benefit of my uncle.’