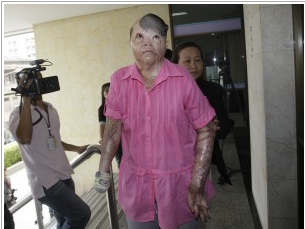 THE BANGKOK POST DESCRIBED THIS AS A WHITEWASH.
No fall guy for an illegal club operation as Godfather owner
goes free-
The owner of the Santika Night Club in Bangkok which burned
down killing 67 people and injuring another 200, some seriously, today walked
free from the Appeal Court after they found him not guilty.

Wisuk Setsawat, alias Sia Khao, the owner was found not
guilty even though these claims were made.
·        * Only two exits were free – one for staff – another
was blocked for security reasons.
·        *The club was not even registered as a club but
as a private house/ restaurant.
·        * The signature of the city architect approving
the club’s design was forged.
*Only one
fire extinguisher was working
*  A band called ‘Burn’ was allowed to take in and
set off fireworks inside the club.
* Between 2004 and 2006, police had filed 47
charges against the club’s owners for illegal operation. No charges were filed. In addition no charges were filed after the fire in relation to the fact that the club was allowing in 17-year olds and the club decor was made of higly flammable materials. A co-owner was a senior policeman.
Those originally charged
Wisuk Setsawat,  owner
of White and Brothers (2003) Co which ran the pub was initially charged along with the following company and people. But the man left to carry the can was the guy who installed the lighting and sound system. It does not look transparent.
—————–
The special effects installer Focus Light Sound System Co.  Fined: The equivalent of £500
Boonchu Laosihanart, Manager of Focus Light Sound System Co
Thawatchai Sithumma, Santika Operations Manager
Pongthep Jindaits, Santika Entertainment Manager;
Wuthipong Wailikree, Santika’s marketing manager;
And Sarawut Ariya, lead singer of the band Burn, who was
accused of lighting fireworks that might have sparked the fire in the pub.
Of all these Boonchu  and ‘Sia Khao’ were the only persons convicted. Both remained on bail and Boonchu, who was sentenced to three years in jail is
expected to appeal to the Thai Supreme Court. ‘Sia Khao’ had originally been sentenced to with Boonch to three years.
The original conviction of  ‘Sia Khao’ was trumpeted as a rare victory for Thai justice.
Comment: This is really not good. I have not seen the judgement. I guess it will eventually by published in full. But not even Thais will see this as a transparent judgement. Just as in every disaster – like the One-Two-Go aircrash on Phuket, nobody important gets to take the wrap. Life goes on. But the lives of many in this fire and on Phuket did not.