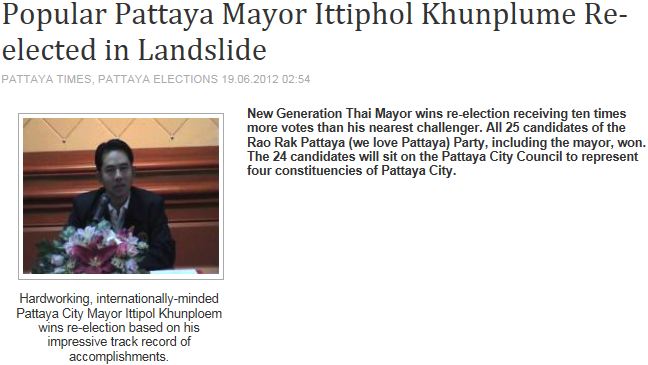 A Tale Of Two Cities

I don’t know the Mayor of Pattaya Ittiphol Khunpleum although I have met him a couple of times. But I guess I should congratulate him on his recent re-election for yet another 4 year period in office – thus keeping local politics in the family.

These newspapers have fawning way of informing their foreign readers about local politics. Don’t worry about giving the other side. In fact don’t bother printing any opposition interviews or manifestos. That way you don’t have to mention who else is actually standing in opposition.

I don’t think journalism is taught this way in Knoxville, Tennessee or Copenhagen but I guess, if they plug the mayor and not mention the opposition, they may think they will gain brownie points.

Both waxed lyrical about Khun Ittiphol, whom I am assured is a smart cookie and thus not daft enough to bother what is in either newspaper. Nevertheless after garnering a less than withering 20,000 votes, (most people stayed at home) against an opposition 2,000+ Khun Ittiphol still went on a victory parade throughout Pattaya, as in cup final day.

I also could not find the opposition candidates in the Pattaya Daily News, but did find some info in the Pattaya Mail and on Pattaya One news, though I’m still hungry.

But are local politicians courting the foreign language press in Pattaya – as the British Labour and Conservative parties did with Rupert Murdoch?

Certainly not. Do you think Tony Blair read ‘Il Iberico’ or the Polish Observer in his election run up?

In one way this is all good news and the foreign editors should be congratulated. The Pattaya People has endorsed the Mayor. This is Pattaya realpolitik!”

A major point in Khun Ittiphol’s 14 point plan for Pattaya, unless he has had last minute thoughts, is the ‘eradication of Pattaya’s red light venue – Walking Street’.

So the endorsement by the CEO of the Pattaya People, himself a former ‘operator’ in Copenhagen who was sentenced to jail there for offences of violence, dishonesty, and living off immoral earnings, again marks a massive turn around on the Pattaya People swing-ometer towards law and order….even though the editor of another newspaper tried to put in a bid for bar equipment including chrome poles at a local auction house.

I take it the Mayor (left) does not mean the literal demolition of Walking Street. I think he means to turn it into some sort of Covent Garden, Champs Elysees, Via Veneto,  Stroget,  Kurfurstendamn, or Greenwich Village,  so tattooed foreigners on steroids and kamagra can view the talent while daintily sipping espressos by the side of the boulevard.

Here below is Khun Ittiphol’s full 14 point plan for Pattaya.  Of course in Thailand these things take time, lots of it.

This manifesto  was first published in 2008. Perhaps a local can spot the changes.

10. Drugs:  -the establishment of a drug-observation and prevention centre.

11.  The encouragement of ecotourism

12. The construction of a sports centre.

13.  The establishment of a tourism festival.

14.  The encouragement of world-class entertainment

I have just come back from Phnom Penh, Cambodia, where you can actually sit on the boulevard, sip cheap wine, or espressos, and view the talent parade in front of you every evening as it gathers itself for a stroll along the side of the Phnom Penh River.

I love Phnom Penh. I am praying it’s not going to change. My prayers will be ignored.

My view across the river had already destroyed by this monstrosity – a giant Sokha hotel being built on the opposite bank.

I was actually there for the arrest of Patrick Devillers, a Frenchman who has been linked to the murder of Briton Neil Haywood in China. Well I was not there for the arrest. That was done in secret. His whereabouts were also kept in secret from the public – as France and China – fought over him.

‘Hop off you Frogs!’

So Devillers was not up for interview. Had he been so, however, I think he would have preferred the option of giving an interview with ‘La Monde’ or ‘Liberation’ rather then an anglais debilé from the ‘Daily Mail’.

The French and the English still do not get on, despite endearing and reconciliatory headlines in the London Sun such as ‘Hop off you frogs!’ whenever the French displease the editors.

The only newspaper to have done an interview with him was the ‘New York Times’. The interview consisted of him saying he was not giving an interview, quoting a Chinese proverb, and complaining about the press.

I do not think wearing a kilt and claiming to be ‘un écossais’ and quoting ‘L’auld alliance’ would have made a difference.

But what a great trip it was and I managed to have a bite with old friends, Michael Hayes, the founder of the Phnom Penh Post, and also with its current Editor Alan Parkhouse and his Thai girlfriend. The newspaper, which was founded in 1992, is celebrating its 20th anniversary this year.

All ganja’d up
I knew its founder Michael Hayes, before he knew he was going to found it.  These were the times when the Khmer Rouge was still active and killing people and Cambodia was the wild west. I once went to a party at the Phnom Penh Post where there appeared to be a rich ganja soup on offer and where occasionally someone would shoot off an AK 47, prompting retaliation from an other AK 47 at a local temple.

I fell down the stairwell, three floors I said, and picked myself up without even a bruise. The ‘London Times’ actually recorded this bit of news in a feature I wrote about an old friend Nate Thayer – the guy who found Pol Pot.

Years on I now went back to the stairwell. It was quite clearly impossible to fall three floors.

“If that happened,” said Michael Hayes, “you’d be dead. But I remember you falling”.

Jeesh. Can’t you believe anything you read in ‘The Times’ anymore? Perhaps it was just 2 floors, or er. one.

The newspaper was founded in the midst of mayhem and with the Khmer Rouge still kidnapping foreigners I made frequent trips.

The PPP is continually showered with awards – real ones – not the type Pattaya newspapers award each other, but ones which are awarded internationally.

Journalists actually write for this paper, and some very well known ones often contribute for free. International universities send their journalism undergrads to the Phnom Penh Post as interns to get some hands on experience, even though newspapers are dying in droves.

And they also criticise the boss – and he’s Hun Sen for heaven’s sake – known affectionately to foreign journalists as ‘Hun’.

Pardon my English but what a F….g difference from the Pattaya rags.

But then again journalism is one of the goals of the Phnom Penh Post – which is why everyone is broke.