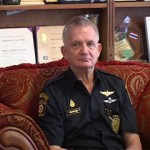 The Pattaya People was today found guilty of criminal libel and has been ordered to pay compensation of 500,000 Thai baht to an Australian managed property company which a court ruled the newspaper had defamed.

The CEO of the ‘Pattaya People’, Copenhagen man-about-town and one time pimp turned crime fighter’s assistant Niels Colov and Editor  Laddawan Yingyong were however found Not Guilty of the same libel at Pattaya Provincial Criminal Court.

Niels Colov, and his former squeeze, mother to his sons, it seems thus walked from the court without a stain on their characters, but the runaway newspaper is in the do do. I am not sure that can be right if they actually control the newspaper but perhaps all will be clear when the full judgment is translated.

It was stated in court that the ‘Pattaya People’ had campaigned against a condo being built by the Indo-Chine Asset Management Co. by Dongtan Beach saying the building was illegal.

Niels – LaddawanThis apparently conflicted with the interests of another condominium close by – the Jomtien condotel. The Indo-Chine condo was however quite legal the court seems to have accepted.

But as a result of the newspaper stories, saying the Indo-Chine condo was going to be blocked because it was in breach of all sorts of regulations, the company lost clients and income.

The Pattaya People has been ordered to apologise frequently, I gather. The newspaper however was unavailable for comment.

Trevor Dick boss of Indo-Chine was cautious. He said: “I wish to reserve judgment until I have read the judgment in full.”

But there was certainly no hand shaking picture taken outside the court.

Here’s the latest picture of Niels Colov this time with Pattaya Police and also CSD, issued by local police, opening a community watch programme to invite the public to assist in crime fighting. Spot the stalking crime fighting duo.

COMMENT
This is an interesting judgment.  How does one collect 500,000 baht from an abstract and inanimate object when the directors of that object are not guilty?

Moreover, as has been pointed out already, Laddawan Yingyong appears to be no longer the editor of the Pattaya People, even though the newspaper has not removed her name.

That of course may be because every newspaper in Thailand must be edited by a Thai national and no replacement has been found.  I do take the point however that it’s unlikely she ever knew what was going into the newspaper.

But, more to the point, how does a foreigner remove a Thai national (see above) from a newspaper which she majority controls and ban her from publishing houses in Pattaya?

Could today’s judgment be, a correspondent points out, a sort of Nuremberg judgment. That was when the Nazi Party, the Gestapo  and SS were deemed illegal bodies guilty of war crimes, whereas individual members were not necessarily.

However in this case there has been no ‘I vas acting under orders!’ defence by anybody.

One cannot of course jail an organization or inanimate object or rather perhaps commit it  to a life sentence gathering dust in the Pattaya Immigration office, so how can one order it to pay cash?  And how come the stories, there were several of them, got into the newspaper without the publisher/ceo or editor knowing?  There has to be a better explanation.

This rings a bell. A few years ago I was convicted of libel by the Pattaya Court but the newspaper, editor and features editor of the newspaper which published the story were found not guilty, which posed the question raised by the Foreign Correspondents Club of Thailand how did did they not know about the story they had commissioned and put into their own newspaper?

This recent case could be just a charming Thai judgment aimed to please or either piss off both parties equally, something we do not get for instance in British courts and  which few foreigners can really understand. Moi aussi.

Legal note: While I have made a few abstract observations I cannot take comments critical of a judges ruling in Thailand.