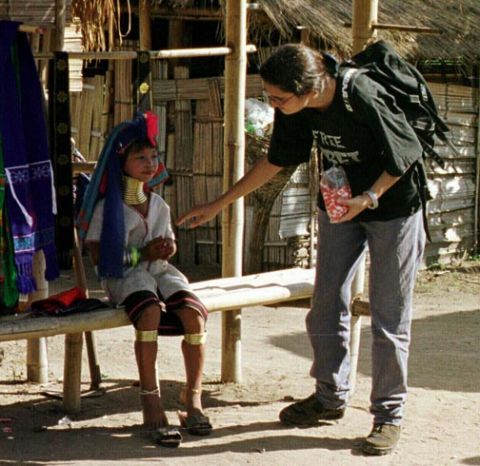 Long-necked women kidnapped for Thailand’s lucrative ‘human zoos
From Andrew Drummond, Bangkok, November 7th
Police in Thailand are investigating new allegations that unscrupulous tour operators have kidnapped Burmese long-necked women for use in lucrative tourist camps known as ‘human zoos’.
Six members of the Padaung Burmese hill tribe have been reported missing from refugee camps in the Northern Thai district of Mae Hong Son, 400 miles north of Bangkok and police have set up an investigation team to try and find them.
Police Major Worapot Phuttawong said: ‘We believe that the only purpose for their kidnapping is for exhibition in these tourist camps over the peak holiday season which is beginning now and will continue over Christmas.’
The missing persons report was lodged by a Padaung man called Yathaue, aged 43, who says his wife Masae, aged 34, and eight year old daughter and six year old son disappeared after she went to pick the children up from school in Huai Pukaeng, near Mae Hong Son.
When he went looking for them in another long-necked community in Baan Huai Seu Theo, villagers there complained that a 21-yr-old long necked woman, Mali, had been kidnapped along with a 10-yr-old boy Layeu and an 11-yr-old girl called Keuboma.
The kidnapping of Burmese long necked woman from Burma for tourist camps in Thailand was first exposed by ‘The Times’ ten years ago.
A Thai businessmen was arrested and charged with detaining people against their will.  The Governor of the Tourism Authority of Thailand said at the time that ‘human zoos run by unscrupulous businessmen’ were harming the county’s reputation.
The businessmen was, however, later acquitted in a local court, as indeed he had boasted he would be, and since then numerous ‘long-necked camps’ have been started in the province of Chiang Mai.
Legally the only place the long-necked tribe can reside is in the refugee camps in Mae Hong Son on the Thai-Burma border, but Thai authorites have turned a blind eye and issued permits for the long necked women to be employed as ‘farm labourers’ elsewhere.
They do no farming. The children do not have access to schools and are required to sit in their huts with their mothers all day and weave or dance for busloads of tourists.
Sudarat Sereewat, Secretary of The Fight against Child Exploitation (FACE) who organised the previous rescue of nine adults and 21 children from a ‘human zoo’ in Thaton, Northern Thailand said: ‘If these children have indeed been kidnapped for a human zoos the authorities should come down on the culprits in the strongest way possible. It is quite shameful.  I hope no authorites are involved in covering anything up.’
*Prisoners in a Human Zoo