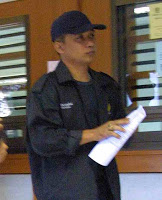 -HE WOULD HAVE GOT DEATH – BUT SOMCHAI WISETSINGH WAS AN ‘OUTSTANDING’ THAI POLICEMAN- AND NOW HE’S COUNTING THE DAYS. 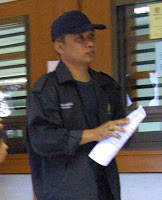 Police Sergeant Somchai Wisetsingh whose death sentence for the murders of backpackers Vanessa Arscott and Adam Lloyd in Kanchanaburi was commuted to 50 years nine years ago has had his sentence reduced by 32 years.


Wisetsingh first gunned down Adam Lloyd, 24, on the River Kwai Road in Kanchanaburi in September 2004, then he got in his car and ran over Lloyd’s girlfriend Vanessa,23.

As she crawled away and tried to support herself on a pylon by the side of the road he then killed her execution style – with bullets to the head, neck and chest.

Wisetsingh who had been named Outstanding Policeman of the Year in Kanchanaburi Province the previous year then fled to the Thai Burmese border but he was handed back to Thai police soldiers of the Karen National Liberation Front.

He had befriended Vanessa and Lloyd at his S & S restaurant in Kanchanaburi. It is believed on the night of the murder there was an argument among the three of them after Wisetsingh had followed Vanessa to the rest rooms.

Vanessa left the restaurant and Adam Lloyd and Wisetsingh were involved in a fight  in which the police senior sergeant, who played an active role in former Prime Minister Thaksin Shinawatra’s ‘War on Drugs’* , took a beating.

Before fleeing he received treatment hospital for a broken rib and black eye.

In fact he had not co-operated with the police investigation. He was in consistent denial of the facts claiming a drugs informant  called ‘Mr Ya’ had carried out the murders because he was angry about the attack on him. Wisetsingh could not supply any contact details for the drugs informer.

He also claimed he hardly knew Vanessa or Adam, but from pictures found on the couple’s camera it was clear he had befriended them in his restaurant.

And journalists covered his trial were pepper sprayed by his colleagues when they tried to get close and take his photograph.

Wisetsingh was prosecuted on forensic evidence. While many locals witnessed the shooting which was near another popular restaurant they admitted they were scared to give evidence against him in court.

It is expected that he will benefit from further reductions of sentence for  various reasons.

Vanessas’s father Graham Arscott, 66, said today he was ‘shocked’at the reducations in sentence.

She was executed ‘Bang Bang Bang’

Murders on the River Kwai