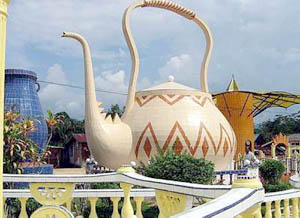 Teapot woman sent to jail in Malaysia
From Andrew Drummond
March 4th
A member of a persecuted sect nicknamed ‘The Teapot Cult’ yesterday
began a two year jail sentence in Malaysia for renouncing Islam
yesterday.
The 57-yr-old woman Kamariah Ali was sentenced in an Islamic Shariah
court after she refused to respond to a judge’s Islamic greeting.

Muhammad Abdullah a judge of the Islamic Shariah High Court in Kuala
Terengganu jailing 57-yr-old Kamariah Ali said the court not convinced
that the accused had repented and was willing to abandon any teachings
contrary to Islam.
Left: ‘All hail the teapot’ – Sky News 2005

‘The accused also failed to respond when I greeted her by saying
Assalamualaikum  (‘Peace be upon you’)  during the start of the court
proceedings. This shows that Kamariah has not repented,’  The Malayian
‘Star’ newspaper reported.

It was the woman’s second jail sentence for ‘apostasy’ – abandoning her
religion. She was sentenced despite the fact that the Malaysian
Constitution guarantees freedom of worship.
Kamariah had been charged with ‘apostasy’ – denouncing her religion in
an Islamic court which are given separate powers to deal with Islamic
only cases.

Kamariah is a member of the ‘Sky Kingdom’ religious sect whose most
notable symbol is a cream coloured teapot the size of a two storey house
which stood at the commune’s headquarters in Terengganu. The teapot is
said to symbolise the ‘purity of water and love pouring from heaven’.

The sect’s leader Ariffin Mohamed, also known as Ayah Pin, who has gone
into hiding,  is believed by his followers to be the reincarnation of
Jesus, Buddha, Muhammad and Shiva. The sect has members in Britain, USA
and Australia and practices religious tolerance and ecumenical dialogue.

The Sky Kingdom’s supporters website carried the following message: ‘We
are the supporters and friends to Ayah Pin. We respect his ideology to
educate moslem people in Malaysia and the world. To teach Moslems to
respect the people’s right and not to take the law into their own hands
like Talibans..We hate Talibans.’

The commune was first attacked by vigilantes then torn down by the
Malaysian government in 2005 and most of the followers were arrested.
They were charged with being part of a deviant sect, or of renouncing
the Islamic faith.
Pending her appeal Kamariah Ali has started serving her sentence in Pengkalan Chepa prison in Kelantan.