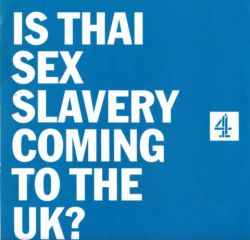 The Times Friday May 14 1999
A C4 expose of the trade in Thai women to the British sex
industry should have dealt a blow to traffickers. Instead it may have
endangered some of those who took part, says Andrew Drummond
On April 29 smart blue flyers were inserted into newspapers
throughout Britain posing the question: ‘Is Thai sex slavery coming to
Britain?’
The flyers were advertising Channel 4’s Dispatches: The Sex Slave
Trade, broadcast that evening, an undercover investigation into the
vicious trade in Thai women to the sex industry in Britain, where these
women have been beaten, locked up and forced to service up to 700 men,
for the price of their ticket and UK visa.

Last year 1 was asked to assist in the making of this programme,
which turned out to be a courageous piece of investigative journalism.
Not surprisingly, Channel 4 says it is immensely proud of the programme,
‘which led directly to eight girls being saved from slavery in East
London’.

But in Bangkok I am paying the personal and professional cost of being
associated with the programme, while others are frightened and fearful
following the broadcast.
The programme producers, based out of ‘Granada/London Weekend, set up
a sting operation by establishing a phoney escort agency in London,
complete with website and telephones.
For my part in Bangkok, having already built up large files on these
trafficking groups, I was able to make arrangements to put the
Dispatches ‘pimps’ into the heart of meetings with the syndicates. It
worked successfully.
Local racketeers and foreigners involved in this trade were lured from
under their stones to talk about their trade and offer women to what
they thought was a new market in the United Kingdom.
So why are we at loggerheads now? My main complaint is that they may
have unnecessarily put at risk the lives or well-being of those who
volunteered to help.
As a senior investigator on the programme, but who had no control over
the final script, I not only feel betrayed, but also that I have
betrayed some Thai people who willingly lent a hand at my request
because of their very real commitment to putting a stop to this market
in their own people.
When selling the idea Lee Sorrell, the producer/reporter, and the
freelance director, Howard Bradburn, insisted that the women featured in
the film would be treated as the victims that they are. Accepting that,
I made no editorial conditions on my own involvement.
There is no question that Thailand has a flourishing sex trade. But film
of Thai prostitutes in a stale of partial undress in Bangkok sex clubs’
and London or Glasgow massage parlours has upset my Thai friends.
Contrary to public perception, the Thais are in fact a modest people.

How am I to explain this to the Thai friends who lent a hand? Shall I
say ‘But Channel 4 told everyone it had a serious commitment to women’s
rights’, because that is certainly what Channel 4 had told us.
This programme could not have been made without my assistance. My Thai
colleagues and friends know this.
Many of them have been hurt, one to
the point of tears.
Such a letdown, when in terms of evidence against the trafficking groups the programme had achieved so much.
Producers of this kind of investigation are always torn in two
directions. They owe a duty to those they interview not  leave them
vulnerable to revenge attacks by those pimps who were out to exploit
them.
This usually means hiding their identity by filming them with their
backs to the camera or in silhouette and by disguising their voices.
But at the same time, producers know that programmes are much more
compelling if people are interviewed face to face and names, locations
and other details are given.
I should have read the signs when close personal friend and Thai human
rights activist, Sudarat Sereewat, decided not to dine with the crew, if
I were not present, after a particularly gruelling day of interviewing
under aged girl who had been lured into the sex industry from remote
north-eastern Thailand.

Now a debate is going on as to whether these girls should have been identified by Channel 4 all.
Sudarat is an experienced member of Thailand’s Justice Human Rights
Committee and last year she was a key figure in a ‘Times’ campaign that
forced the release of a group of Burmese ‘long-necked’ tribal children
from captivity in a ‘human zoo’ in northern Thailand. I have absolute
trust in her.
She now feels that the girls’ faces should have been disguised. Channel 4
says it was not asked to disguise the girls and that it had ‘changed
the names of the girls’, who were in no danger because ‘The chief of
police in Udorn Thani is aware of the girls’ situation.’
Still, it is difficult to describe the pain on Sudarat’s face when she
saw these girls depicted on the programme. I can assure Channel 4 that
the police chief no longer knows the whereabouts of these girls. It is
feared the girls were being hounded by the traffickers. So has Channel 4
left two young girls open to revenge attacks? We may never know.
Channel 4 did however make mistakes. I was sent a script of the
programme by the channel’s publicity office 36 hours before
transmission. To my horror it contained information which would have
exposed somebody inserted right at the heart of a Triad operation. I had
the commentary changed.
But one woman ‘Noi’ who was willing to talk about the Triads under
anonymity is now at risk because while steps were undertaken to conceal
her identity from the average British audience it would not have been
hard for the Triads to identify her from what she said and her detailed
description of the beating she received at a massage parlour in London.
As stated on the programme Channel 4 will now have sent information to the Bangkok police about what it uncovered.
But it may be too late, assuming the police will actually take action.
Now that the programme has been broadcast the pimps will almost
certainly have vanished. As a result the investigation in Thailand has
gone belly-up. The traffickers remain at large and may seek revenge.
Last weekend I had to move one local investigator out of Bangkok as that
person, we discovered was being actively sought. Another local
informant is out of Thailand and scared to return.
As for Channel’s 4s somewhat xenophobic flyer ‘Is Thai sex slavery
coming to Britain?’ the quick answer is almost certainly no. Where it
does happen the trade in women could not take place without the
assistance of British, Australian, Canadian, and American couriers, who
bring the girls into Britain.
The real tragedy of this programme is that while some girls have been
saved from the clutches of pimps, there are other women in Thailand who
for a long while to come, remain fearful of the beating they get from
those who sought to exploit them.