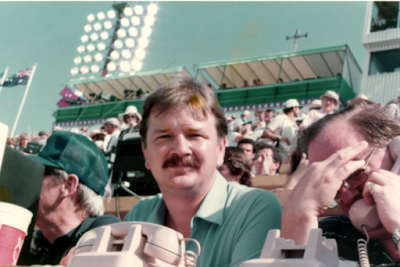 Wow. Today I was watching Lionel Richie perform at Glastonbury which would take me an hour and a half to reach if I left now. It does not seem so long ago since the last time I saw him live, but actually it’s a staggering 31 years!

The occasion was the closing of the 1984 Olympics in Los Angeles. Also turning up at Glastonbury was the Dalai Lama – who appeared before an audience of 120,000 – a sight more than those present at the FCCT in Bangkok when he appeared there.

Tempus fugit, and how.

Also at LA for the Olympics was Neil Wallis, then billed by the Daily Star as the ‘World’s Greatest Living Reporter’ – currently still on trial in relation to phone hacking (He was Exec Editor of the News of the World) and Hugh Whittow, from ‘the valleys’ who is currently editor of the Daily Express having played a major role in the ‘Blackie the Donkey’ rescue on the way.

This was of course before the internet – but I had a computer which was a Tandy which allowed you to read five lines at a time and transmit by sticking a phone into two suction caps. But Hugh must have started one of the world’s first computer dating services – by using the Olympics messaging system.

I of course took my leave from News International – now News UK – during the strike against Rupert Murdoch in 1986.

I saw the writing on the wall, as many people of course did, but it was easier for me to give up a healthy salary than those who had wives or children to support besides by this time I was making television programmes.

The Olympics was of course one great big party. I arrived early I seem to recall and was diverted to cover the San Ysidro Massacre at a McDonalds’ restaurant outside San Diego. For which I booked into the legendary Coronado Hotel (Some Like it Hot).

Ah memories. I wonder how Mary-Anne is doing now.

Can’t think why she put up with that awful moustache though.