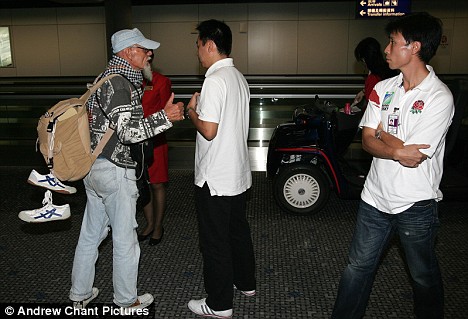 Glitter, aka, Paul Gadd tries to negotiate himself out of Hong Kong

The disgraced glam-rocker Gary Glitter has finally agreed to return home to Britain after falling for a trick by Thai police, with a little help from their colleagues in Hong Kong.
The 64-year-old convicted paedophile sat alone tonight on a bench seat in Bangkok’s Suvarnabhumi airport, cordoned off from the press in a transit area and waiting to be deported for the third time in three days.
Glitter, whose real name is Paul Francis Gadd, was thrown out of Vietnam on Tuesday after serving two years and three months for abusing two girls aged 10 and 11.
But his arrival in Bangkok from Ho Chi Minh City left Thai Immigration Police in a quandary.

They did not know the strong feelings his name conjured in Britain and, although they had been tipped off about his arrival, nobody had given them any official documents which they could use to further his deportation to London.

Reading on the aircraft
Officers knew he had been convicted in Vietnam, but the government there did not give Thai Airways any deportation documents – even though it insisted that Glitter travel coach class. He got himself upgraded as soon as he entered the plane and arrived in Bangkok as a person with status.
‘I am a free man. I have served my time,’ Glitter insisted, producing a document from his Vietnamese lawyer stating that he was a full member of society, purged of any crimes and free to travel where he wished.
He then demanded to change his London ticket for a ticket to Singapore. When he was told there were no flights at that time of night, he demanded overnight accommodation and installed himself in a transit area at the airport where weary passengers can book rooms by the hour.
As the minutes ticked away for TG901, his connecting flight to London, in stepped an officer of CEOP – Scotland Yard’s Child Exploitation and Online Protection unit – who said that Glitter should be returned to London forthwith. He then withdrew and booked him a room nearby, admitting that he was ‘out of his jurisdiction’. He had no papers to present which could validate a deportation.
Thai police duly turned up shortly after midnight to take him to the plane, but Glitter would not budge. He demanded attention from the British Embassy duty officer, who duly arrived in the form of Stephen Buckley, a member of the commercial section whose duty that night was to out-of-hour calls from Britons in life-or-death situations.
Glitter ranted about his rights. ‘I will need to call the Ambassador,’ Mr Buckley said diplomatically.
The following morning, with the plane already gone, the British Embassy told Thai officials that they did not want to get involved, which left the Thais back at square one. Glitter slept through as the morning flights left to Hong Kong and Singapore, his destinations of choice. He did not surface until 11am and refused to leave his room until he was brought a ticket.
The Thai Airways midday flight left for London without him on board. Thai Immigration told Thai Airways to solve the problem because they had brought in a deported person without the right documentation.
Glitter was eventually invited to a 3pm meeting in the office of the head of the airport police. A solution could be reached, he was told, that could be agreed by all parties.
Singapore was ruled out, said police, ‘because they won’t even let you in there’.

When Glitter suggested Hong Kong there were quizzical looks and an officer was sent out to enquire.
‘I’ve been in jail for nine years. Why can’t I go and do some shopping in Hong Kong,’ said Glitter smiling. Everybody smiled back. Some laughed.
Within the hour Glitter was promised a ‘Press Free’ permit to Hong Kong, although he was advised to buy a return ticket anyway.
By 7pm Glitter was in seat 11B, a glass of champagne beside him and happily unaware that he had fallen into a trap. He planned to stay in a luxury hotel in Wanchai and used the phone on his arm rest to summon a friend to collect him at the airport.