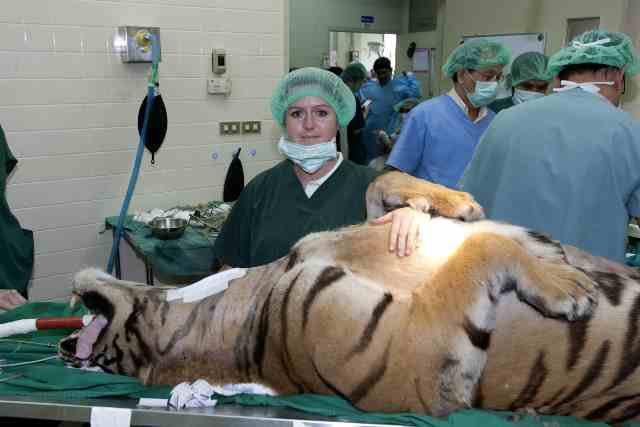 A young Scots vet  Louise Wilson, 29, more used to dealing with pet cats in Aberdeen, found herself face to face in surgery with a 150 kilogram Asian tiger today after switching jobs.

Louise, from Newton Hill, Aberdeen has been put in charge of caring for Meow, a 12-year-old rescued tiger who underwent a two-hour operation to fix his broken neck in the Thai capital Bangkok (Monday).

‘That is considerably bigger than the cats I’m used to dealing with,’ joked Louise, ‘it’s been a heck of a start and now even harder work begins with Meow’s rehabilitation.’

Louise and the two Thai veterinary surgeons were elated after the risky operation at the Chulalongkorn Veterinary Hospital and are hopeful that Meow will once again be able to prowl his enclosure at a rescue centre 200 miles south of Bangkok.

29-year-old Louise, who previously practiced at Robson and Partners in Laurencekirk near Aberdeen said: ‘It’s a bit frustrating because while the operation appears to have gone well, but we won’t know for weeks whether Meow will walk again.’

The story behind Meow’s injury is tragic.  He sustained his injuries when he was chained up as a tourist attraction at a petrol station when he was a cub in Thailand. Tourists put their children on his back for photographs. He was rescued by the Wildlife Friends Foundation Thailand ten years ago.

WFFT boss Edwin Wiek said: ‘He’s always had trouble walking and balancing, but in the past few months things took a turn and got much worse. He couldn’t sustain his own weight and we had to walk him in a river to keep him in shape’

So last month Dutchman Edwin brought Meow to Bangkok for an MRI scan and finally discovered that he had a fractured vertebra in his neck, which was deemed treatable.

Louise, a Glasgow University Veterinary School  graduate  first came to Thailand in November on holiday but ended up joining a local animal charity helping street dogs that had to be rescued from the devastating floods that struck Bangkok.

She later returned to Scotland and handed in her notice after being offered a job at the WFFT centre in Petchaburi province, south of Bangkok.

‘My plan was to stay 6 months, but judging by my first two days it could be longer,’ she said.

(Oh shucks. I see Julie-Anne Barnes took the byline on that one. Still would not want people like to think I’m going soft. They could have given Andy a picture credit though)