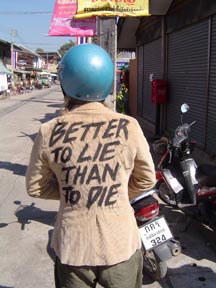 LETTERS TO THE EDITOR

Last week The Nation newspaper publish an account by myself in the aftermath of the shooting of two young Canadians in Chiang Mai. This article included some of the history of Carly Reisig during her stay in Mae Hong Son’s Pai district.

This included the facts that she had hit a policeman in the past and had also been involved in some other fracas.

I included those facts because in the Thai context they could be relevant. I also had to ensure the story was even-handed. I was writing on the basis that Carly Reisig would be given a fair and level playing field.

I now of course realise that despite an extensive background covering similar cases in Thailand I was being rather optimistic, perhaps even naive.

While the facts presented were true, they have been wrongly taken in a malicious way by many, including ‘long-term resident expert foreigners’, as a reason to justify the attack on the two young Canadians.

As a journalist one is compelled to give both sides of the story. So I also included statements from witnesses interviewed by a colleague, who claimed Reisig started the fight.

What the journalist cannot convey sometimes is his opinion of whether the witnesses are telling the truth or show immediately what links these witnesses have to the police.

I am reminded that no witnesses would go to court and testify that they saw Police Sergeant Somchai Wisetsingh shoot two British tourists dead in 2004. I am also reminded of the vicious stories put about concerning Vanessa Arscott.

I am very concerned at several aspects of this case:

1) The police claiming that Reisig was pregnant and this had angered a jealous foreign boyfriend.

2) The claims by the police shooter that he had been out of town before the shooting, when other witnesses were saying the officer was drinking heavily that night in Pai.
3) The threats to prosecute Reisig for assault on police.

4) The automatic bail for the police gunman.

5) The fact that local police are investigating themselves.

6) The claims that the gun had discharged three times accidentally.

Ms. Reisig has not asked me to apologise, nor would she, but I would like to tell Carly publicly that, having seen how this case is progressing, I am sorry for including facts which are being used against her and which after all have not helped her in what will by a very trying battle to come and which certainly do not give anyone justification for these atrocious shootings.