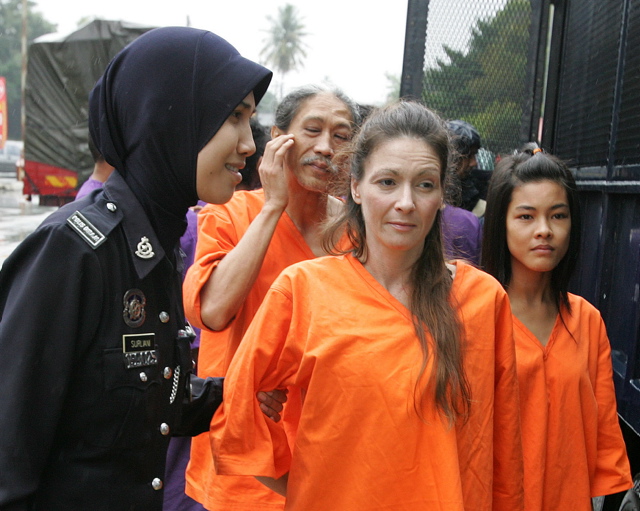 Briton Shivaun Orton faces death in Malaysia for drugs trafficking. But was she a trafficker or a victim? And will she be able to convince authorities she had no choice? A comment by Andrew Drummond.

Times have changed in the execution business.  In the old days I guess one took along one’s knitting and applauded as Madame Guillotine sliced off heads in Revolutionary Paris.
Or in London one could jeer and shout from a specially erected grandstand at Tyburn (Marble Arch).

Today, seemingly facing the inevitable path to death row in Malaysia, 41-yr-old British mother Shivaun Orton is the target for critics on internet forums, most of whom seem to be of the opinion that she deserved what was coming to her.

Having read a couple of heavily edited articles people have formed their opinions. But as a journalist myself I can hardly escape criticism that I was there in Malaysia myself visiting Shivaun because of widespread interest, much of which may have been morbid.
Clusterf*ck!

This is a story which ten years ago would have guarenteed what is known as a ‘clusterf*ck’ when the whole of Fleet Street would have descended on the resort of Cherating. Today is the time of news regurgitation.

The fact is that I am not new to trials and executions in Malaysia. In fact, after a Papal Tour in the Philippines and a brief spell chasing a wayward English Lord (Moynihan) in the same country, my first foreign assignments in Asia were about 25 years ago to the trials of Australians Kevin Barlow and Geoffrey  Chambers in Penang, and later Briton Derrick Gregory.  All three were hanged in Pudu Prison, Kuala Lumpur.

I got to know Kevin Barlow and Derrick Gregory reasonably well.  The Barlow and Chambers case caused a bit of stir and seemed to affect bi-lateral Australia-Malaysia relations.  Indeed Barbara Barlow. Kevin’s mother, was later played by Julie Christie in an Australian docudrama on the case.

Hanged on his first trip abroad

In all cases there were widespread comments by the Malaysia authorities warning the foreign media and governments not to interfere in Malaysia’s domestic affairs.
That these three people were guilty, there is little doubt. But in the case of Derrick Gregory there was clear indication that he was not right in the head.  He had spent his youth in special schools for the subnormal.  He had a conviction for attempting to take a train from Charing Cross station in London. He had never been abroad before, not even to France.  A brain scan showed abnormalities.

None of this was however enough to get him off. Interestingly though Derrick Gregory made a full confession to the authorities naming all the people he knew in the syndicate. The Malaysian Police did absolutely nothing with this statement.  With such a strong anti-drugs stance one would have thought that the Malaysian police would have been interested in providing international co-operation.  But their interest was much more short term.

I got hold of the statement and embarked on a world-wide tour from London to Malaysia, to Japan, to San Francisco, Phoenix, New York, North Carolina and home*. I finally ended in the car park of a squash club in Walton on Thames, Surrey, being pinned against a wall by the drugs kingpin who sent Gregory to Malaysia (and met him there) shouting: ‘You had better be careful. You don’t know who you are dealing with.’
‘No Man Wants to Die’
While this man was exposed both in the Observer newspaper and on television, of course Derrick Gregory was not around to testify against him because he took the long drop.  ‘No man wants to die’ he said.
‘I’m in God’s hands now.’
Shivaun Orton’s case is a lot different. She claims she was virtually held captive in Malaysia by her husband. She claims she tried to run away but was stopped by police in Bentong who had been called by her husband Abdul Harris Fadilah.
Repeatedly raped
She claimed that her husband listened on the mobile phone as she was repeatedly raped by police, who had been told that she was an escaped Russian prostitute.  She claimed that the British High Commission said they could do nothing for her, neither would the local press, but eventually she was allowed to make a statement about what happened to her to police in Kuantan, Pahang, after which of course, nothing happened.

Is all this credible?  Was she taking me for a ride?  I believe her, the emotion in her delivery and detail was compelling, but it will not be enough to get her off if Malaysia applies its laws traditionally. Its enough she was in the house. Will the court allow some washing of dirty laundry?  Very unlikely. But when I interviewed her, and I am the only journalist to have spoken to her, she wanted to talk about the rape experience first, even before talking about drugs. I believe that indicates the trauma she underwent was of much more importance to her.

Superintendent Roslan Al Wahib, of Terengganu Narcotics Criminal Investigation Department is probably right when he says Abdul Harris Fadilah has been dealing in drugs for years.  But he dealt across the state line in, Cherating, Pahang State, a resort area, and according to calls I have been getting from ex residents, once notorious for drugs dealers.

Border between Pahang and Terengganu
I have however seen no sign of the five vehicles they owned, presumably from the proceeds of drugs, and their home in Kemaman in Tregganuu appears to be rathet unkempt and run down, not the palatial  mansion of a drugs lord.

The home in Kemaman which was raided

So why did not police in Pahang State move in on Abdul Harris at his Ranting Resort at Cherating?  Could it be that his father, Abdul Manaf,  has the honorific title of ‘Datuk’ and is a construction and property king who built Kuantan Golf Course.

‘We can’t believe Shivaun is getting the rap for this,’ said a woman Malaysian lawyer who used to have a resort there.

The reason, she said, was that Shivaun simply did not go to the drugs hang-outs. Her husband kept her at home and accompanied her rarely. ‘She could never be a dealer’.

What is known is that police in neighbouring Terengganu State received a tip off that Harris kept his stash at home.   He had clearly upset somebody. The 225 grams of heroin was found in his room.  In her room police found five cannabis plants, enough for life imprisonment anyway.

Superintendent Roslan Al Wahib says that a girl staying in the house, Ram Nazural Shima, described as the girlfriend of Shivaun’s older son Jacob, and an ‘adopted daughter’, neither of which are incompatible, will be released when Shivaun and Harris make statements to say she has no involvement.

But Shivaun has been charged with the heroin too.  There’s no let off for her. Will she be able to prove the traumas she suffered during her marriage?  That she was held against her own will? And will the court accept it as being relevant.

Malaysia has been quietly backing off executing people. If the death sentence is passed Shivaun can appeal to the local Sultan.

But she has been dealt the wrong cards and I can’t help but feel that she has had a terribly raw deal out of life in Malaysia and the nightmare for her family is just beginning.

Positively speaking both Malaysia and Britain have changed as has our perception of each other.  There is no longer Mahathir waving his stick at the U.K. and making mock accusations of colonialism. And many Malaysians think pretty much  the same. Many are, after all educated in the U.K.

It maybe has not helped that this may be viewed as an Islamic issue. But the real issue is whether Shivaun is  a drugs trafficker or an abused wife. Taken in that context Malaysia need not face any criticism at all.

The last drug’s trial I attended was of Britain David Chell. He was found not guilty on appeal and escaped the gallows. He escaped on a technicality – the faulty presentation of the prosecution case. He claimed he was set up by police after refusing to pay a bribe.

*That trip was in the main First Class. A few years later Paul Gregory, Derrick Gregory’s younger brother, saw me waiting to board ‘cattle class’ on a Bangkok bound British Airways flight at Heathrow.  It was long after Derrick Gregory was hanged.  Paul was a BA loader.  When I boarded I was ushered straight to the First Class cabin. Most of BA knew about Derrick Gregory at the time. I was very touched.

Update: On Sunday June 26th 2011 after most of the charges against her reduced and all trafficking charges dropped – after analysis of the drugs – Shivaun Orton was sentenced not to the gallows but 14 months in prison, most of which she has already served. A very good result.