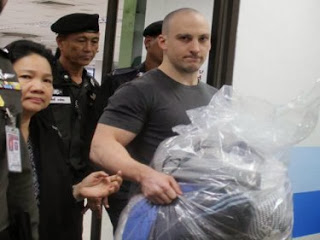 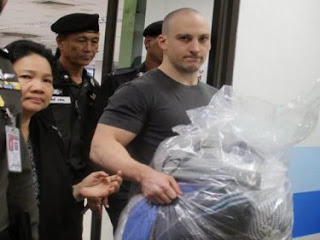 A British kick boxer who stabbed a U.S. Marine to death in
Thailand was today jailed for 25 years on the Thai holiday island of Phuket.

Lee Aldhouse, nicknamed ‘Pitbull’ , who was the first Briton
ever to be extradited from the UK to face trial in Thailand, had pleaded guilty
to the murder, despite putting up a strong fight against his extradition.
As a result of his guilty plea Judge Montri Sarot reduced a life
sentence of 50 years by half to 25 years.
Aldhouse was extradited from Britain to Thailand in December
under a treaty that had been in place for 101 years but never previously been
applied. 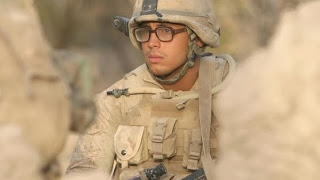 He admitted stabbing American Marine Dashawn Longfellow, 26,
from Colorado Springs, a recipient of the ‘Purple Heart’ earned during his time
in Iraq, after a row in a bar called the ‘Freedom Bar’ in the resort of Rawai
on Phuket island.
Last month as he was remanded for sentence he said: “”I
would like to apologise to his family and his friends. I didn’t mean to kill
him like that. ‘On that night, I got very drunk. I understand that my apology
will not be enough for the family. But I cannot undo my mistake.”
His apology was not enough the family. CCTV footage shows
him going into an all-night 7/11 and running off with a knife directly before
the stabbing Longfellow, even though he went home first and changed it for a
better ‘Kivi’ blade.
He stabbed Longfellow, former member of the 2nd Battalion,
7th Marine Regiment outside Longfellow’s apartment.
He was also known in the bar for boasting that he was ‘invincible’.
Longfellow was also a Thai kick boxer.