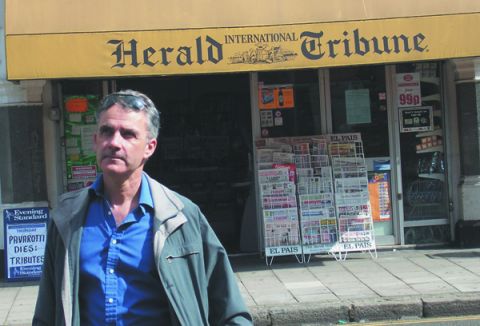 Andrew Drummond, Bangkok | September 08, 2007
THIS is one of the world’s most notorious – and remarkable – heroin
traffickers: Melbourne man David McMillan. He should be dead. Or at
least wasting away in a Thai jail awaiting death by hanging.
Instead, on this September morning when The Weekend Australian
tracked him down to London’s Fulham Road, he was buying the papers on
the way to his job, packing health food.

The Caulfield Grammar-educated drug dealer, who for decades helped
run a multi-million-dollar trans-national crime empire, is a wanted man
in Thailand. Having skipped parole in Melbourne, he cannot return to
Australia without facing jail.
McMillan cheated death through a miraculous escape from the infamous
Thai jail known as the Bangkok Hilton. He rehearsed for the breakout
from Klong Prem prison in 1996 by years earlier plotting to escape from
Pentridge Prison’s D Division in a helicopter.
When he was released after a decade in jail in Australia, he skipped
the country on a false passport. He has never returned and has no fear
that Thai or Australian authorities will come looking for him.
‘Simple, really: the British Government will not extradite to a
country where the death penalty is still practised, and breach of parole
is not an offence for which I can be extradited to Australia,’ McMillan
says from his London bed-sit. ‘Besides, I have a British passport.’
Despite still being on the run, McMillan, now 51, has written a book,
Escape, about the 30 years he spent moving heroin from the Golden
Triangle of Southeast Asia and the Golden Crescent of Pakistan and
Afghanistan to Australia and Europe, and his amazing breakout in
Bangkok.
‘He was charming, a dashing buccaneer, very different from your
average crim,’ Australian QC Philip Dunn says of the young McMillan.
At the peak of his career in the 1980s, McMillan says he was a
multi-millionaire: ‘I maintained a large flat in Mayfair, homes and
offices in Melbourne, and apartments in Bangkok, Hong Kong and
Brussels.’
But as he came to the attention of the Australian Federal Police, the
US Drug Enforcement Agency and British Customs, he was forced
constantly to switch cabs and enter and exit department stores to
confuse followers and carry a variety of mobile phones and passports at
all times.
McMillan was busted for his first kilo of cannabis at Heathrow in 1979 and served six months in Reading jail.
‘I was one of those who thought all drugs should be made legal,’ he says.
‘I started dealing among friends, but, of course, with the profits
being so good it went much bigger. I am not going to pretend what I am
not. It is inevitable that as a result I will be labelled a Merchant of
Death or something like that.
‘I make no justification for my actions. It was just a life.’
McMillan first came to notoriety in Australia in 1983 when, at 26, he
was sentenced to 17 years’ jail for spearheading a million-dollar
heroin ring.
His then lover, Clelia Teresa Vigano, the daughter of a wealthy
Melbourne family, and another woman, Marie Escolar Castilo, died in a
fire at Fairlea prison asthey faced trial over the syndicate.
In his three years in the Bangkok Hilton, McMillan had a better time than most drug couriers.
While the foreign prisoners in Building2 battled vermin, worms, TB
and AIDS, and had a diet of soup with an occasional fish head, McMillan
had his own sanitary toilet and servants, including a chef, whose
ingredients came from the local supermarket.
‘I had access to television and radio and my own office, and instead
of 70 to a cell, we just had five. This all cost about 10,000 Thai baht a
week,’ he says.
Once he realised the death penalty loomed, McMillan had hacksaws delivered, hidden in posters.
The guard searching his gift box was distracted by pornography, which was, of course, confiscated.
According to McMillan’s account of his escape in August 1996, he
sawed through two bars and crawled out along a plank. He descended two
storeys to the ground using webbing belts.

By 2.55am, he had reached a prison factory where he kept ‘an office’.
He picked up gaffer tape, eight sturdy picture frames, some civilian
clothes and water.
In the prison’s paper box factory, he constructed two ladders from bamboo poles, tape and the frames.
After scaling three inner walls and negotiating ‘Mars Bar Creek’, a 2 1/2m-wide open sewage trench, he climbed the outer wall.
‘I reached the top and opened my eyes to a view I had imagined for so long it was already a living memory,’ he says.
After reaching the bottom of the outside wall, he followed the earth
path around the prison with a raised umbrella over his head.
‘I held to that day’s maxim: ‘Escaping prisoners do not carry umbrellas’,’ he says.
It was just after 6am. By 10am, McMillan ‘ armed with a new passport
from the city’s Chinatown, with details already logged into the Thai
Immigration Police computer ‘ was boarding a flight for Singapore.
‘Eventually I heard the sound that was a kiss to every smuggler: the fwump of sealing aircraft doors,’ he says.
Having escaped the death penalty, or the minimum of 100 years in
prison, McMillan might have thought it time to quit the drugs trade. He
didn’t.
He lived in Pakistan with a member of the local nobility, but was
arrested in Lahore and brought to Karachi Central Prison on another
charge of heroin trafficking.
By another stroke of luck, or as McMillan would have it, ‘fair
justice’, he was acquitted of the drugs charge and by the late 90s was
back in Britain.
Did he stop? No. He was last arrested in 2003 at Heathrow airport for
trafficking in 500g of heroin. He got four years and is now on parole.
*Drug runner – a dead man laughing