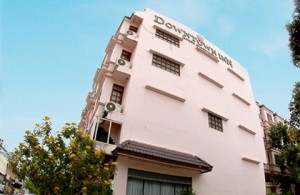 The controversy raged on and on for months and months – but the demise of the ‘Downtown Inn’ in Chiang Mai – has now been reduced to a four minute music video on you tube.

The Downtown Inn hit the headlines last year when a number of people died either on premises, after staying there, or after being taken to hospital from it. This website in particular was foremost in revealing deaths which had been kept quiet.

The matter was taken up by the New Zealand, British and Canadian press and even Trip-Advisor put out warnings which are still up on the net.

The owners this year to decided to demolish the whole lot and rebuild a boutique hotel on the spot.

Was there anything wrong with the Downtown that could not have been fixed?  Almost certainly not. Maybe the owners thought demolishing it and building a new ’boutique’ hotel was just a better financial option.

Certainly people had a problem with the name ‘Downtown’ and that was associated not just with the deaths but with officials seemingly bent on covering up the problem.

The deaths  for instance at one time were put down to ‘co-incidence’  when an elderly British couple died together in one room. This attracted even more ferocious foreign press attention – while the local press was tame.  The Bangkok Post eventually got round to dubbing it the ‘Death Hotel’.

But it’s not the local press foreign tourists are reading. There are lessons to be learned. But these lessons will no doubt still be ignored.  We still have mystery deaths of foreigners who stayed in accommodation in Phi Phi.

So bosses, and mayors,  if this happens again, give the public the truth.

Do your best to get to the bottom of the problem.

Do not give them what you think they want to hear.  They don’t.

People die in hotels all over the world all the time. They even get bombed out of them. But the hotels survive.

Whistling in the wind?