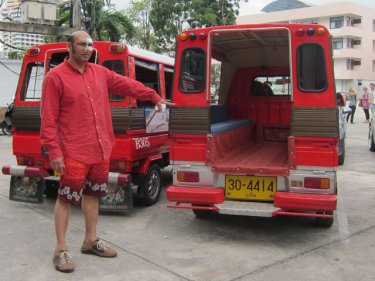 British and Foreign diplomats in Thailand have asked the authorities on a Thai island to put an end to the extortion and ‘dog pack’ attack on tourists.

In a showdown with the governor of Phuket island diplomatic officials from Britain, Australia, Austria, and Germany, the Netherlands and Sweden, have complained that tourists who complain about being extorted on taxi and tuk-tuk fares, are attacked by packs of up to twenty Thais and savagely beaten.

Phuket, once dubbed the ‘Pearl of the Orient’ is fast earning the reputation island of greed, say the diplomats.

(Picture Left by Phuketwan. Canadian victim Bob Anwar)
Several tourists have been bottled, knifed, kicked and slashed for refusing to pay demands of up to ten times the taxi and tuk-tuk rates in the Thai capital Bangkok.

And if the tourists complain to police they often find the police assist the drivers to file counter claims of assault after ‘finding’ their own injuries.

That means any protesting tourists face being either locked up, or forced to fend for themselves for months in Thailand while on bail awaiting trial.

Consular officials have also complained yet again about the systematic extortion of tourists by jet-ski operators, aided by the police, who have been demanding and getting thousands of pounds for false damage to jet skis – after offering either a beating or arrest to the ‘offending’ tourist.

According to the diplomats absolutely nothing had been done since major complaints were lodged by the British Embassy two years ago when Royal Marines from 40 Commando, based in Taunton, were threatened with a gun by a jet-ski operator and told that they would be arrested by his police friends if they did not cough up around Ãƒâ€šÃ‚Â£1000.

British Honorary Consul Martin Carpenter said the reaction of the authorities had been little and that prices needed to be revised downwards. ‘I cannot say whether the FCO Travel Advisory will be updated to include specific problems here.’

What tourists could face but in larger numbers
Nowhere is safe from the cheats, said one diplomatic representative. Even holiday-makers returning home could find themselves missing their flights if they refused to comply with taxi drivers who would double the rate half way through the journey to the airport.  If they refused police, who were in on the act, would attend the scene.

Currently a German citizen Kurt Trotnow, 52, is in a coma in Phuket International Hospital after being attacked by twenty tuk-tuk drivers when he refused to pay a 200 baht (Ãƒâ€šÃ‚Â£4.15p) tuk-tuk fare for an 800 metre ride, about five times the rate in the capital Bangkok, and that was for being ferried in what one consular official described as ‘an open tin can’.

German Honorary Consul Dirk Naumann (left/ {Picture Phuketwan) said there was no further point in moderating his comments. He said: ‘Our citizen could die. He was attacked by 20 thugs, but I understand the police are supporting a case against him too.’

Mr. Naumann (left) added: ‘We have complained and complained against cheating and attacks on tourists but nothing has been done. It’s like talking to windmills. It’s a national disgrace in a country they call the ‘Land of Smiles’. The number of German visitors is dropping fast.

‘I myself am scared to go to Patong Police station in case I am recognized and singled out as a target for helping the victims.’

He said he had recently done a survey at Phuket International airport. Of 100 people interviewed, he said, 26 announced they would never return on any account.

‘Normally if one bad thing happens to you on holiday you can brush it off, but when bad things are happening all the time, it puts you off the place for ever. That is what is happening here. A lot of people are not coming because of the water pollution as well.’

Australian Honorary Consul Larry Cunningham (right – Phuketwan)  said: ‘Assaults on tourists have increased and not all are being reported. The cheats are well up on what to do. They will ‘find’ a small wound themselves and will file a counter-charge against the tourist

‘Two young Australians had to flee the country earlier this year after being stabbed by a tuk-tuk driver. They were attacked by a pack as they returned to their hotel after an argument with a tuk tuk driver.

‘They had no choice, counter charges were filed, which would mean having to go through the court system which can take years. One had 70 stitches in his head, the other, a young lad, had some very serious damage to his arm.

‘The tuk tuk and cab drivers are aggressive. There is nothing gentle about them.’

Cunningham has also raised the subject of jet-ski rip offs and the failure by authorities to prevent drownings by failing to keep tabs on the beaches during the monsoon season.

51-yr-old Canadian Ivan Bob Anwar (left -Phuket Gazette)also had to flee Phuket this year after an attack who later noticed he too had an injury, and two Dutchmen were later attacked  by a pack leaving one with 17 stitches in his head. Most of the attacks happen at the Patong Beach resort area.

Dog pack like attacks have also been reported on the holiday island of Koh Samui.

Austrian Ambassador Dr. Johannes Peterlik the most senior diplomat present at the meeting said that unless improvements were made his country would be forced to issue a stern travel advisory warning tourist about travelling to Phuket. This might be necessary he said to ‘protect our citizens’.

He said that the tuk-tuk was a national symbol of Thailand but it was now becoming a symbol of violence.
Alan Morison  Editor of the Phuket Online newspaper ‘Phuketwan’ said: ‘The world’s generosity in restoring Phuket after the tsunami in the numbers of returning tourists has not been matched by Phuket. It has been met with greed.’
What has also infuriated diplomats is that earlier complaints they had made appear to have been whitewashed and not even entered into the minutes of their meeting with the governor of Phuket, or if they were, they were included in a watered down way.

Phuket Governor Governor Tri Augkaradacha said he would address the issues concerned and ensure proper minutes would be kept of later meetings after consuls led by the Netherland’s Consul Seven Smulders expressed reluctance to sign any further incomplete records if they remained ‘one-sided’.

Right: ‘But look what the foreigner did to me!’, the tuk-tuk driver who allegedly attacked Canadian Bob Anwar seems to be saying to the Phuket Gazette photographer.
And his wife points out his savage wound.


With acknowledgements to the Phuket Gazette, and to Phuketwan and especially to Alan Morison who has been providing readers of Phuketwan with detailed and taped reports from these vital meetings.