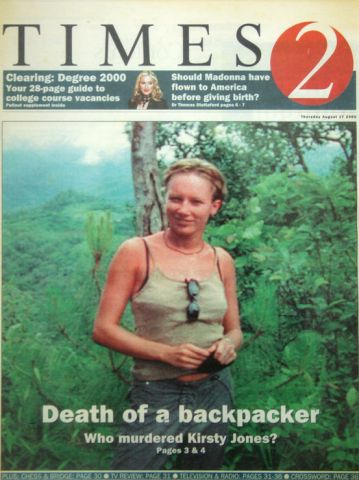 Andrew Drummond’s articles for ‘The Times’, ‘Mail on Sunday’
and ‘Sunday Times’ in the U.K. highlighted an irregular police
investigation into the death of Kirsty Jones, a 23-old-backpacker from
Wales, who was murdered and raped in the Aree guest house in Thailand’s
northern capital of Chiang Mai in August 2000.
It is a controversy that remains to this day. From the offset local
police and press trampled all over the scene of the murder at the Aree
guest house in Chiang Mai.
They publicly pulled in several suspects and then, perhaps in
frustration, seized a tour guide called Narong from the Karen ethnic
minority and interviewed him in a ‘safe house’ away from the police
station.
After his release, dumped by the side of a road, the local Chiang Mai
tour guides association demonstrated on his behalf and took the tour
guide to Andrew Drummond, as a representative of the independent
international press.
Narong said he had been tortured; police had threatend to set him on
fire. and finally that the police even tried to extract sperm from
him.
After Drummond’s stories were publish and aired in Britain, the police  promised an investigation into their own conduct.
The results of the investigation, if it took place, were never made
known, but at least Narong now felt more secure. His DNA never matched.

Police enquiries were not helped by the fact that the guests at the
Aree Guest House were, in the main, a bunch of misfits and drug-users,
paying US$2 a night for a room.
One had heard Kirsty screaming for help but did not do anything
‘because people often argued in guesthouses and it was not my business’.
Thai police eventually arrested the British guest house owner Andrew
Gill and an Aree guest-house massage instructor called Surin Janpamet, a
former monk who had been disrobed for ‘having sexual intercourse in the
grounds of a temple.’
Police were forced to let both Surin and Gill go after they did not match the DNA sample of the killer.
Thai police then clamed that the DNA, which came from sperm, could
have been bought on the streets of Chiang Mai and artificially placed on
the scene.
But when Dyfed-Powys Police, in the form of Detective Superintendent
John Wilkins and Detective Inspector John Hugheson, arrived on the
scene, after consulting with Home Office scientists in England, they
disgreed.

Dyfed-Powys Police provided a full DNA profile of who they say is the killer.
Prior to his release Andy Gill was sent Ãƒâ€šÃ‚Â£12,000 by his father to assist in his freedom.
There is considerable doubt as to where that money ended up.
Andrew Drummond’s investigations uncovered the bank transfers from
Andorra. Thai police insisted the cash was seized by Gill’s Thai
girlfriend and denied the cash was used to wheel the oils of justice.
Thai police took the unusual step of parading Mem (below) in front of
a table piled high with Thai baht and admitting she stashed the cash.
Though they never brought charges against her and the money was never
returned.

If that was the case, as Drummond pointed out on the television
programme ‘Who Killed Kirsty Jones?’ , it Thailand did not mean
that Gill paid to get off a murder charge. Gill was in breach of the
immigration laws. He did not even have a visa to Thailand.
Sadly today nobody has been found to fit the profile. The killer is
still at large and Kirsty’s parents have been unable to get any closure
on this case.
Drummond’s reports on this brutal murder formed the thread around
which award winning documentary maker Ross Wilson directed ‘Who Killed
Kirsty Jones?’*
Andrew Drummond believes that several people know the identity of Kirsty’s killer.
*’Who Killed Kirsty Jones?’  Wark-Clements for Channel 4 U.K.