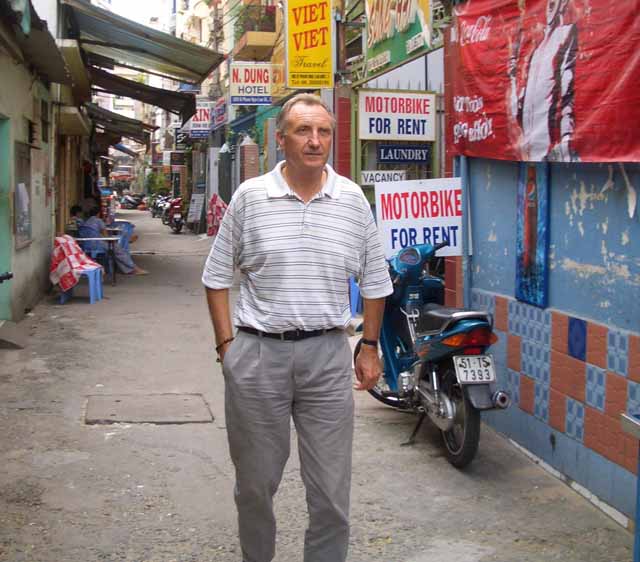 From Andrew Drummond,
Bangkok July 3 2011
A British businessman will learn this week if he is to go to jail  in Vietnam at the behest of Irish billionaire millionaire Patrick McKillen – the owner of showcase property worldwide.

Peter Laking, 60, from Midhurst, Sussex, will be flown from Ho Chi Minh City to Hanoi on Wednesday to hear the result of his appeal for allegedly cheating McKillen and Dublin lawyer Ivor Fitzpatrick out of US$210,000 in quarry ventures in the country.
He has been convicted in a court in Vietnam but few expatriates believe Laking is capable of fraud..

McKillen and Fitzpatrick had attempted to prosecute the case in the High Court in London but the case was thrown out.  They had more success with a criminal case in Vietnam where McKillen has been building a business park and where he mixed with the leaders of the politburo.

The case has sparked some controversy.   Dr. Thomas Faolan Earlie, from Galway, the EU representative in Vietnam at the time of Laking’s arrest has described the situation as an ‘abomination’ and a ‘farce’.

‘Peter was an absolute gentleman; a lovely man. There is not an ounce of corruption on him. I can vouch for that 100 per cent.’

And his business partner Sean McCormack, 72, originally from Crossmaglen, who escaped joint charges with Laking by crossing the Cambodian border said: ‘Peter is a delightful man. The absolute salt of the earth. He would walk a mile to help anyone.’

But he added: ‘ In Ho Chi Minh city now he is a ‘dead man walking. Nobody takes on the state and wins and Peter is fighting the state now.’

McKillen claimed that Laking and and McCormack sold a company he and Fitzpatrick had invested in from under their feet. They failed to present a case at the High Court in London but were easily able to file criminal charges in Vietnam.  McKillen and Fitzpatrick have since fallen out over the prosecution issue.

A question is how much, if any,  assistance did they get from the Vietnam Government?

Certainly government assistance mean that they were able to visit Laking in Prison 64 in Ho Chi Minh City, accompanied by security police, And once there and with official co-operation they forced him to sign over his assets and were allowed to photograph him. They are assets which, claimed Laking, were valued at a lot more than the money he was being accused of cheating ,  charges which he strenuously denies.

That meeting has become the subject of a prisoners’ rights report.

In a statement the Foreign Prisoners Support Service said:  ‘Peter Laking is paying a terrible price for what seems to be an act of personal revenge from his two former business associates who have been unduly influencing the judicial proceedings against him. ‘

When Mr. Laking was visited by Fitzpatrick and McKillen, their report said:  ‘He had still been denied access to anyone other than the investigating officers in his case (including lawyers).

‘He had been locked in his cell with the light on for twenty-four hours a day, sleeping on the floor with no idea of even what time it was and he was severely disorientated.

‘He agreed to sign but he made it clear that he was only signing the papers because he had no option other than to do so, and that his signing of same was not in any way an admission of guilt on his part’.

McCormack and Laking were accused of selling the quarry company and equipment McKillen and Fitzpatrick had invested in from under them.

But they insisted it was a legitimate buy-out and the cash was still there. What’s more they had legitimate reasons to do so.  Further the company they sold was not the one McKillen and Fitzpatrick had invested in.

The matter has been dragging on since 2002 and Peter Laking has been unable to see his family. He has been on bail but forbidden to work and forbidden to leave Ho Chi Minh City boundaries.

McKillen told the London Times back in 2005: ‘I don’t want to see Peter languish in a Vietnamese jail.  I have said to Ivor I would not wish that on my worst enemy.  But he is a foolish man who caused his own problems.’

Yesterday in Ho Chi Minh City Laking was not convinced about McKillen’s sincerity. They had been business partners for seven years and even dated Vietnam Airlines hostesses together but he is not counting on an old friendship:

‘The state has taken on itself as the victim and the state never loses.  There is nothing more I can give, so I am not hopeful.  McKillen has everything of mine, what more does he want?’
Comment:
Paddy McKillen who started off in the car exhaust business is one of the most controversial figures in Ireland. His property empire has spread from the Connaught and Claridges Hotels in London, to property in New York, Boston, and Rodeo Drive, Beverley Hills. During Ireland’s recent crash prompted by the action of such banks as the Anglo-Irish which was funding projects in Vietnam ( hence lots of visits by Irish politicians and even  Prime Ministers) the current government tried to take over his loans, but failed. He co-owns a hotel in Dublin with ‘Bono’ of U2.