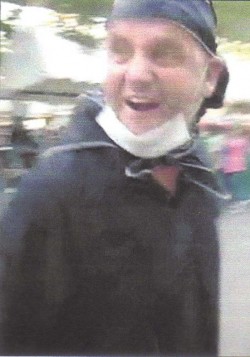 From ANDREW DRUMMOND,
Bangkok
May 21
www.youtube.com/watch?v=2wYlda08kR8
Link to Andrew Drummond at Evening Standard
Link to THE SUN
Link to Daily Mirror
A British red shirt ‘anarchist’ caught on video saying he was going to loot and burn down Asia’s second biggest shopping mall said today: ‘I was not there when it burned down but if I was I would have helped the bastards’.
And now as the multibillion dollar Central World in Bangkok lies in charred ruins Thai police are searching for Jeffrey Savage, 48, an NHS worker from London, who they believe was goading on the red shirts on the frontline against troops in Bangkok.
Death for looters and arsonists

They also want to interview him over massive lootings and burnings which left the city in flames.
The hunt comes as Thailand’s Department of Special Investigation ( DSI) Director-general Tharit Pengdit has warned those who loot or commit arson may face a maximum punishment of death penalty.
Dressed in a black shirt and headband and carrying a bamboo pole Savage was caught on tape during the Bangkok riots saying:
‘We are going to smash the Central Plaza to shit and steal everything out of it and burn the fucker down!
‘Trust me. Get the f*cking pictures. We are going to loot everything, gold watches, everything, and then we are going to burn the f*cker down!’

Central World with over a million square metres of retail space, originally called the ‘World Trade Centre’ and built on land owned by the King of Thailand is in total ruins and will have to be totally rebuilt.  Set alight too were 34 other buildings in Bangkok and shop-owners are counting the cost of massive looting.

‘I am not worthy of my brave brothers’

But although Savage says was not there he admits he WAS outside Channel 3 Television in Bangkok which was also set in flames and has been off air since Wednesday.
‘I did not do any looting. I did not set fire to anything, but those who did are my brothers. They are brave. I am not worthy of them.
‘The attack on Channel 3 was organised. I saw the elder leaders giving directions.  The red shirts hated Channel 3.  There was a BMW showroom next door which was totally untouched. This is Class War.
‘This was not like the poll tax riots in the UK. ‘
NHS driver
Savage, originally from London, but who last worked as a hospital driver in Tonbridge, Kent, spoke after Thai police were alerted to the video taken by Scots teacher  Andy McGinley, 28, from Glasgow.
McGinley said: ‘I could not believe what this idiot was saying.  This was shot in Rajadamri on the approach to the red camp. I just thought he was an anarchist but what he said was prophetic.
‘I have been thanked by hundreds of people mainly Thais for showing the film, but I have also received threats too from foreigners.’
‘I nearly killed someone at the ASEAN demo’
Savage also admitted taking part in the UDD (United Front for Democracy against Dictatorship) demonstration in Pattaya in April 2009 when the ASEAN meeting had to be cancelled.
There were fierce battles outside the meeting of the Association of South East Asian Nations at the Royal Cliff Hotel and windows were smashed and the meeting had to be abandoned.
‘I nearly killed someone there,’ said Savage who is now in hiding with his Thai wife in Pattaya and says he may make a break either for the country or abroad.
‘On the other hand I stick by my principals and if necessary will do some time for this. I do not regret saying I will burn Central world down.
‘I am standing up for the poor. My Thai brother in law gets only 200 baht a day (Ãƒâ€šÃ‚Â£4.00) for ****s sake.
‘I was furious when I gave that impromptu interview on camera. I had been wound up by some American college type journalists.

Central World Bangkok ablaze
‘But the fact is that I have seen some of my brothers killed at Phan Faa (an earlier red shirt demonstration last month when troops opened fire near Democracy monument, Bangkok) and I was absolutely horrified!’
Savage admitted that he had come down to Bangkok from Pattaya with a group of fellow red-shirts but fled with his friends over a wall on Wednesday when the Thai military moved in.
‘We were going to take refuge in a Buddhist temple but had we done that we would be dead now.’
‘My friends are professionals. Some of them are ex-police and ex-army. They know exactly what they are doing.
‘But everybody is running scared. Everybody is looking for redshirts. I could see the look on people’s faces as we abandoned our red shirt house in Bangkok. We had to destroy everything which would give away our presence there.
‘The war is over for the time being.  But in two months time things will start up again. The attacks will begin’.
‘Elitist scum’
Talking about ousted Thaksin Shinawatra, who most red-shirts want back in power,  he said: ‘This has all gone beyond Thaksin Shinawatra now. I have no time for him.  He’s one of the elite.
‘Nor do I have time for the foreign elitist scum in Bangkok.
‘But I love the genuine Thai people and I feel for the poor people and what they have to put up with.’
‘I live in Pattaya but have no time for the bar scene.  As far as I am concerned the foreign bar owners here are just pimps.  But it’s the rich mafia who have moved in who are my real enemies.
‘My Thai wife cannot even go to swim on a beach in Wong Amat (North Pattaya) because Russian businessmen have moved in and taken over. These people are lower than a snakes’s belly.’
As people of Bangkok and 23 other provinces of Thailand went through their second day of curfew police were also studying video taken from the Red Stage.
Philip Alexander a Briton whose property business was based in Central World said he was disturbed by the video.
‘I have talked to the red shirts and most of them there are middle aged or women. I don’t argue politics. They have been sitting all day listening to speakers from the stafe making all sorts of allegations.  Its learning by rote and they were all wound up.’
‘Burn them all’
A video circulating in Bangkok and on the met shows how red shirts were allegedly wound up by their leaders.
One piece of video allegedly shows a red leader saying: ‘Everybody bring a litre of petrol. With a million people and a million litres of petrol, I promise we can make a sea of fire in Bangkok.’
Link to Thailand Will Burn Video