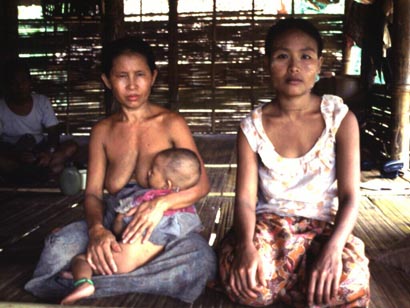 When Burma allied itself with Japan during World War II in the hope of gaining independence from the British, one sector of the population remained loyal to the Crown – the Karen hill people.
They have suffered for it ever since. Andrew Drummond reports from the Burma-Thai border, where the Karen are now fighting for their survival.
SQUATTING ON THE BAMBOO PORCH OF HER NEW BAMBOO HOME in a refugee camp in Thailand, Naw Mu,  28, relates almost impassively what happened when the Burmese army called on her home.
‘They took my father, cut off his ears and stabbed him all over his body. They took him away and paraded him around two other villages as an example of what will happen to people helping the rebels.
‘Then they tied him to a tree and lit a fire underneath him. His torture lasted a whole day before he turned to my mother and said, ‘I can’t bear it any more.’ Then he collapsed into the fire. My father knew no rebels.’

Naw Mu fled Burma with her three children, walking through the jungle for a month. She is a Karen, a hill-tribe woman of Burma’s largest ethnic minority, one of 20,000 people’who recently have sought the safety of Thailand to escape pogroms initiated by Burma’s military dictator, General Ne Win, against people – mainly Karen -suspected of rebel activity.
When The Observer first reported on atrocities carried out against Burma’s minorities last year, the Burma Socialist Program Party (BSPP) in Rangoon described the report as ‘capitalist propaganda’ and ‘lies’ by the Karen.
Now, eight months later, a report by Amnesty International has confirmed The Observer’s findings of the widespread execution and torture of Karen civilians.
Tonight, ‘Burma’s Forgotten War?, in the BBC1 ‘Everyman’- slot, tells how Britain left the Karen, one – of her staunchest wartime allies, to the mercy of the Burmese.
As many as  200,000 people may have died in parts of Burma where the Karen live, now closed to the West Villages where tourists are forbidden ‘for their own safety’ have been burnt down and the population moved into stockaded villages or camps controlled bv the Burmese Army.
In the years up to independence in 1948, the Karen were protected from the Burmese by British rule and had their own lands under British administration.
When the Burmese turned against the British during World War II, the Karen remained loyal. (Viscount Slim, Commander of the British forces in Burma, described them as ‘no fair-weather friends’.)
During the war the Karen formed the backbone of Orde Wingate’s Chindits and sent 10,000 men to the aid of Britain when Japan invaded Burma.
During the occupation many parachuted back into the country with Force 136, an SOE (Special Operations Executive) unit, to cause disruption behind enemy lines. It is this relationship with the British which brought about postwar retribution and the civil war.
Now, at a place called Manerplaw, in a state called Kawthoolei that the Karen set up on the Thai-Burma border, it is though World War II has never ended.
Manerplaw is the headquarters of the Karen National Liberation Army (KNLA), a 10,000-strong group who have been battling the Burmese since 1949.
Their leader is General Bo Mya, a bulldog character and ex-Force 136 guerrilla. His wooden home faces a parade ground in a camp laid out in British Army fashion.
From here he directs his troops, who face the Burmese along a 500-mile front.
In places along the front line the opposing sides are only 150 yards apart, well dug in. During the rainy season, but for the heat and the mosquitoes carrying cerebral malaria, it could be the Somme.
Bo Mya cannot hide his bitterness. ‘You British. Why did you forget us? Why did you hand us over to our enemies?’.
When Burma and Britian held independence negotiations in 1948 the Karen were given nothing.
He screws up his face in disbelief at the memory of Princess Anne’s visit to Burma last year, and at the thought of the friendship between General Ne Win and Princess Alexandra, a frequent visitor to Burma’s capital, Rangoon.
General Ne Win, one of the ‘Thirty Comrades’ who received military training in Japan after the outbreak of World War II, returning to Burma to lead Burmese forces against the British, took control of Burma in a military coup in 1962.
An operation instigated by him, ‘The Four Cuts’ – ‘We cut off the rebels from the villages. We cut off the people from their country. We cut off their supplies and food. We cut off their heads’ – is currently decimating the Karen and other ethnic minorities in Burma.
General Bo Mya says, ‘Our people are being executed indiscriminately, our women raped and families put in camps, yet Britain has turned a blind eye. They pretend they never knew us. What a short memory you people have.’

Situated near the junction of the Salween and Moei Rivers, the scene of bitter fighting during World War II, Manerplaw is the administrative centre of this unrecognised state of Kawthoolei.
The Ministry of Education runs the schools and the Health Service runs the hospitals. The Ministry of Finance looks after an economy based on timber, antimony and taxes levied on cross-border trade with Thailand.
Karen living under the protection of the KNLA enjoy a better standard of living than many in Rangoon.
The border trade is the key to the Karen’s survival. Burma, with its closed-door policy to outsiders, has a stagnant economy. Ninety per cent of its export earnings go to service foreign debts.
The people are reluctant to sell their wares to the government stores. As a result, gems, cattle, artwork, cloth and jade are transported by foot to the Thai border.
Coming the other way, from Thailand, are TV sets, radios and electrical goods, destined for the elite of Rangoon. As much as 80 per cent of trade is black market-based.
Last year the BSPP under Ne Win abolished 90 per cent of Burma’s currency. The aim was to bankrupt the black marketeers. But it only served to impoverish the poor still further.
At the moment, the Karen are hard-pressed militarily. Burmese offensives have pushed their army right up against the Thai border at several fortified positions.
At Kaw Moo Rah, 40 miles north of the Thai town of Mae Sot, we have to keep our heads down as Burmese automatic fire from positions 200 yards in front rakes the Karen 101 Battalion lines.
At Wangkha, headquarters of the Karen 7th Brigade, we have to take to the bunkers as the Burmese lob 81mm mortars on to our positions.
The situation is the same at Phalu, headquarters of the Karen 6th Brigade, but the enemy mortar fire falls at least 400 yards short from an enemy position nearly two miles away.
Back at Manerplaw, Karen women soldiers are being trained to face the next Burmese offensive, expected next month before the rainy season.
The Karen are mainly Buddhist and animist, though the leadership is Christian, converted by American missionaries who penetrated the area 150 years ago. The sexes are kept apart.
Karen soldiers are forbidden to marry before the age of 35. The penalty for pre-marital sex is 10 years in jail in Manerplaw.
Most girls have joined up, unpaid except for 30 litres of rice a month and Ãƒâ€šÃ‚Â£2 at New Year, because their villages have already been burnt down by the Burmese. Many of the families who have recently fled Burma are in Mae Po Tah camp across the River Moei in Thailand.
Since Thailand will not give them refugee status, these people do not officially exist. As a result, none of the international agencies, such as the United Nations High Commission for Refugees or the Red Cross, can get involved.
Shwe Hie Kwin (‘Beautiful Gold’) tells what happened when the Burmese forces entered her village, Wa Tho Kla, in the Thaton district of Eastern Burma.
‘They took a farmer, Saw Wi, and told him to bring them guns. He said he had no guns and knew no rebels. They did not believe him, so they started cutting open his body with their machetes.
‘They poured salt into his wounds. When he did not die after a couple of hours they clubbed him to death.’
The stories are similar in two other camps on the Thai border, Sho Klo and Huey Ka Loke.
The Karen, in turn, are accused by the Burmese of blowing up civilian trains and committing atrocities.
They deny this, but there is a curious paucity of Burmese prisoners. We find only two. A staff officer says, ‘When our troops see what the Burmese have done, it is difficult to curb their enthusiasm.’
In the War Office at Manerplaw is Major Aaron Po Y’in, DSM. He won his medal trying to save the lives of two British officers during a Japanese attack.
He was severely wounded at the time and used to receive a war disability pension from Britain. ‘If I go to Rangoon to collect my pension now I’ll be tried for treason,’ says the Major, who parachuted into Burma with Force 136.
Now 68, he has been fighting with the resistance for 39 years: ‘We will never stop fighting until we win. That could be another 39 years. I don’t hate the British for what they did. We know that it is the politicians, not the people that we knew, who are responsible.’
Last week’s Amnesty report details injudicial executions, torture, rape and other atrocities committed against the Karen. The report names Burma army units and calls for an inquiry. The Burmese government response was: ‘The authorities of the Socialist Republic of the Union of Burma categorically reject these groundless allegations. No execution could take place in Burma without proper judicial process.’
*’Burma’s Forgotten War’ (Everyman’, BBC1, 10.05pm tonight) was produced by George Case of Twenty Twenty Television with Andrew Drummond, the ‘Observer’ correspondent covering South East Asia