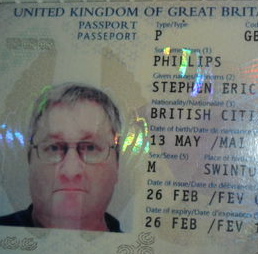 The 29-year-old Thai wife of retired British railway man nicknamed ‘The Wounded Buffalo’,  who was gunned down last week  in rural Thailand, said today (SAT) that he was killed because he caused trouble with a ‘mafia’ group.

Stephen Phillips, 59, was shot execution style as he returned on his small Honda motorcycle, with one bullet to his head, one to his abdomen and two to his legs.  He died instantly.

Phillips, from Swinton, Lancs,  had taken early retirement from his job as a supervisor for Network Rail based out of Torquay, Devon,  and  married his wife Wilaiwan two and a half years ago in the Thai provincial capital of Khon Kaen.

But his widow Wilaiwan today denied having anything to do with her husband’s death blaming it on a mafia group who had cheated them out of 350,000 Thai baht, approximately £7000, in a money lending scam.

“I have been interview by the police but I had nothing to do with my husband’s death,” said Mrs Phillips.

“Yes we rowed over money but he was more angry with the people who cheated us.”

She said that she had fallen for an investment plan offering 20% interest but when the time came to pay back they received nothing.

“My husband was angry with them and me. He said he was going to meet them,” said Mrs. Phillips at the couples’ rented home in Baan Phai, 40 kilometres outside Khon Kaen.

“But these men were not local. They travel from province to province and cheat everyone.”

Rescue workers at the scene of the murder in Baan Phai: Picture Phudtayanbanphai

Thai police did not comment on her story but a Khon Kaen Police spokesman said: “The murder investigation is ongoing and no suspects have been ruled out. We expect to make an arrest within a week. Because a foreigner has been killed extra emphasis has been put on the investigation.”

A friend of Stephen Phillips contacted by phone said: “Every time he came to town he had one problem or other that he needed to solve.

“He earned the nickname  ‘The Wounded Buffalo’ because he was forever being attacked by his wife or was suffering from some problem or other.

“ He was frequently involved in rows with his wife and on one occasion she dragged him to the local police station where she made him apologise in front of police to her.

“He said something like ‘I apologise for my wife’s ignorance’ and she went away satisfied because her English was limited.

“She often accused him of causing her to lose face and I saw her slap his face in public.  Stephen was very careful  with his money, but very naïve about Thai women.

“We cannot believe he would have thrown money into some strange Thai gambling scheme, but his wife had opened a karaoke bar which he did not appear to know about.”

At the No 1 bar in Khon Kaen a British regular said: “Earlier this year Steve had asked that if he got divorced would he have to give his Thai wife 50% of everything even though they had only been married a short time?

“He was advised to get away from her.  We had not seen him for a couple of months so that’s what we thought he had done.  His death, which was more of an execution, came as a shock.”

Catching a foreign husband is considered a bit of a coup for many women living in Thailand’s impoverished North Eastern provinces and many log in to internet dating sites or head for the bars of Bangkok, Pattaya and Phuket in search of one.

Only last week a Member of Parliament of the ruling Phuea Thai Party Sunai Julphongsathorn  urged north eastern Thai women to find a foreign husband as foreign governments would pay for everything down to the ‘shitty diapers’.

At  a seminar  attended by red shirted supporters of the government he was quite blunt saying the women should get on their backs to achieve their goal.

“Sitting studying is too slow. Lie down to study, then go to the hospital. They will pay you to have the baby… It’s all free, right up to the shitty diapers.”

“Having a foreign husband gives you an easy life because European governments give you everything for free.”