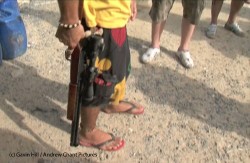 (More rushes from ‘Big Trouble in Thailand)
‘Thailand is awesome. The people are good and sound. Today was a bit different’ – Marine Jack Tebbott
Link: JJ: My uncle is big Captain in police station
From Andrew Drummond, Bangkok, September 13
Royal Marines who claim they were swindled and held at gunpoint while on R&R in Thailand said tonight that they were ‘ready to go to war’ over an alleged cover-up of the incident.

The Marines of Delta Company, 40 Commando, based in Taunton, who were held at gunpoint by a Jet Ski operator on the Thai holiday island of Phuket, said they would take the matter to government to government level, if Thai authorities tried to shift the blame.

And they added that they would stick by a British producer/cameraman, who filmed the whole incident, and who now faces arrest  accused by the Thai authorities of ‘setting up’ the scene for filming.

‘The Thai authorities should choose to hold an adult approach to this incident. If not, we are willing to raise the level of this dispute to that of a diplomatic incident, though of course we will have to go through legal channels,’ said Marine Police Sergeant and Detachment Commander Tim Wright.

The row follows an incident which happened when Delta Company were on ‘R &R’ on the Thai holiday island of Phuket earlier this year.

Royal Marine Police Sergeant Wright (right) confronts JJ
The marines were held at gun-point and surrounded by Thai thugs after one of their number, 21-yr-old Marine Jack Tebbott, from Leicester, was accused of damaging  a jet-ski and faced demands of over Ãƒâ€šÃ‚Â£1,200 in compensation.

Violence was only avoided when Royal Marine Police Sergeant Tim stepped and agreed to authorise a payment.

The whole scene was captured on film by British cameraman producer Gavin Hill. The Jet Ski thug, known as JJ, has since been arrested on charges of extortion. But he has given a statement saying that the film was set up.

Yesterday Thai authorities began steps to try and block a series currently running on a minor British television  channel and they said they wanted to question the producer over the ‘set up’.

They have also countermanded all ‘film release’ forms which were required for the filming and transmssion. Last night Royal Marine Police Sergeant Tim Wright from London said: ‘From what I gather people in Thailand are trying to impugn the reputation of the Royal Marines and of the producer cameraman involved.

‘I have told the producer cameraman Gavin Hill that I and the lads will stand by him. What he recorded on film was the absolute truth.  I do not like my integrity or that of the Marines being questioned. I live by my integrity.
‘I especially do not like my integrity being questioned by a two bit swindler.  If need be we will escalate this to a diplomatic incident.  We also would like to the Foreign and Commonwealth Office to put out an official warning on their Travel Advisory to Thailand.
‘It is quite alarming to see how the film maker s are being treated. The Thais should be dealing with the problem not trying to blame someone else.’

The row over the ‘jet ski mafia’ began after the first of an eight part series called ‘Big Trouble in Thailand’ went to air last Monday on the Bravo Channel.  The film shows the Commandos, who had arrived in Thailand on HMS Bulwark after a tour in Afghanistan’s Helmand Province, restraining themselves as the armed foul mouthed gang leader made his threats and demands for money.

Although the channel has only a small audience in the UK, copies have been circulating heavily in Thailand.

In the programme Marine Tebbott is accused of causing over Ãƒâ€šÃ‚Â£1000 worth of damage to a jet ski and eventually pays out the equivalent of Ãƒâ€šÃ‚Â£627.  But Sergeant Wright, who examined the boat, insisted that the damage was old, very old, by examining the stained fibre glass’

He had already had to deal with other cases: ”You are a crook. You are corrupt,’ he tells JJ who replies: ‘I’m a f….g normal person. I am a businessman’.  In rushes released yesterday JJ also claims: ‘I’m not worried. My uncle is big police here!’

A Royal Marine said later: ‘We could all have got out of there but there would have been claret spilt.’
The ‘damaged jet ski’ con is widespread in Thailand and complaints have already been made by several Embassies, including the British, Australian and Chinese, to the Thai authorities.
Prior to the film’s transmission the Provincial Governor had been ordered by Thailand’s Deputy Prime Minister to act to end the rip-offs to preserve the country’s image for tourism.
Reliable reports say that corrupt police take a 20 per cent cut from all payments.

Meanwhile producer Gavin Hill, who was working for comedian Rory Bremner’s Vera Productions, said: ‘At the moment our relationship has come to an end.  They have not given any support. They are also not honouring some promises I made to the Thai authorities or corrections I am making to the scripts.
‘They appear to have left me out to dry. The Thai authorities are trying to get the series stopped.  But actually if they look at it closely they come off quite well.  We were primarily looking at British tourists on holiday.
‘I actually love Thailand and would not wish to harm the country at all. The authorities cannot see who is doing the harm.’
The series which was shot with the co-operation of the Thai Tourist Police was originally called ‘Thai Cops’. The title was then changed to ‘Big Trouble in Tourist Thailand’ and the Thai Film Board protested.
‘I told the production company that title was offensive to Thailand, but my views were apparently not ‘taken on board’ as they claimed they would be. It’s a mess.
”The situation with the Marines and JJ was real and menacing. It was not set up or scripted. I just recorded what happened’.