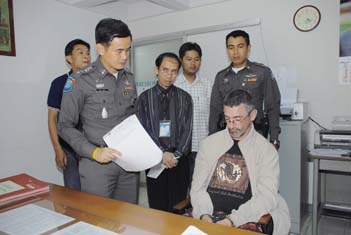 From Andrew Drummond, Bangkok,
March 5th 2008
An Irish computer hacker who posed on the internet as a young Thai woman to successfully blackmail a British millionaire in Bangkok was arrested by police yesterday in Northern Thailand.
Computer hacker David Gerard Murphy, 42, from Dublin, was seized by police, after he decided 40,000 Euros was not enough for his silence and he went back for more than double that amount.

Murphy had emailed the businessman in his office in Bangkok’s business district of Silom posing as a young Thai woman who wanted to introduce herself to him and wished to send a video.
When the businessman accepted and downloaded the video, a virus was introduced which scooped up all his private business correspondence into Murphy’s computer.
The next day Murphy contacted the businessmen threatening to pass on his secrets unless he paid up 2 million Thai baht – 41,688 Euros. The businessman paid up, said Lt.General Virachom Boontaw in Chiang Mai, where Murphy was arrested.
Police are keeping the victim’s name and his secrets confidential, but Murphy would have got away with it had he not got greedy, said Thai police.
Having spent the cash on girls and other entertainment he went back for more, said Police Lt. General Boontaw.
‘The first payment was made two years ago. According to the warrant of arrest at the beginning of this month he tried to blackmail the businessman again ordering him to send a further 5 million baht (104,330 Euros).  But this time the businessman went to the police.’
Police arrested the Thai holder of a bank account to which the money was to be sent in the town of Nakorn Sawan, just over halfway halfway between Bangkok and Chiang Mai.
Enquiries led to Chiang Mai where Murphy was found renting a room in the Baan Thai Guest House with a young Thai woman called Surin, aged 23.
Murphy has refused to comment on the matter but admitted he knew something about the businessman in question.
His girlfriend Surin told the police: ‘I have known him for six months but he never did any work.  He used to sit all day in internet cafes.’
Added Lt. General Boontaw: ‘We believe he has been financing his good times in Thailand blackmailing businessmen here. That has paid for his drinks, his girlfriend.
‘He told us that he graduated from University in computer studies but he has used his knowledge to become a hacker.’