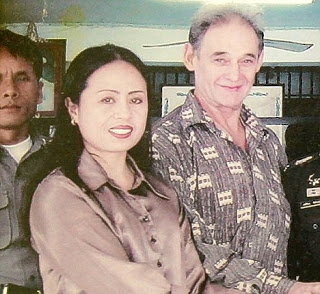 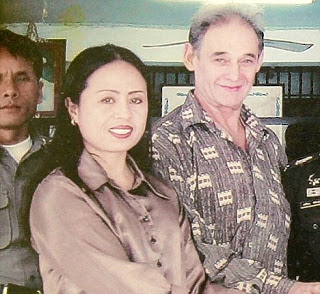 A retired British design engineer predicted his own murder and sat helplessly in his tropical ‘palace’ waiting for it to happen.

Friends said today they armed 69-yr-old Ian Beeston with a tazer gun to protect himself. But it was not enough.

Last Saturday they found body his body. The pensioner who worked at Perkins and Ford’s Dagenham had been beaten and stabbed to death. Police said it took him seven hours to die.

Today Beeston’s wife and her Thai lover were arrested and charged with the murder as horrified onlookers ,shocked at the callousness of the deed,  jeered  and shouted ‘hia’ (Monitor lizard) – a strong Thai insult. 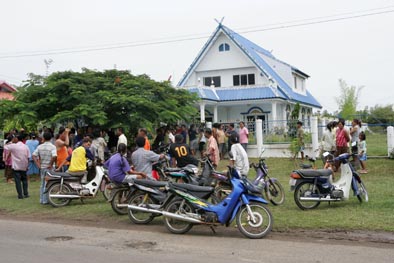 Neill James a consular official of the British Embassy in Bangkok who attended the murder scene in the north eastern Thai province of Roi-Et called on local police for a transparent enquiry, said local police. 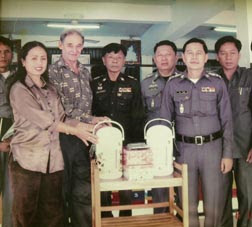 Beeston had predicted his own death in writing. He wrote a letter saying ‘It is just a matter of time now. I am in real fear for my own life. I need things to proceed quickly’.  He left the letter with lawyers.
Trouble started just four months ago when Beeston, married nine years to his 42-yr-old Thai wife, Wacheerawan, nicknamed ‘Wanna’ discovered that she had cashed in all the property he had bought in Thailand at a local bank.

He had invested all his life savings in over an acre of property and built his marital home, a guesthouse and a restaurant near a village called Suwannaphum, meaning ‘Golden Land’.  Thai newspapers this week described him home (aas ‘ palatial’. 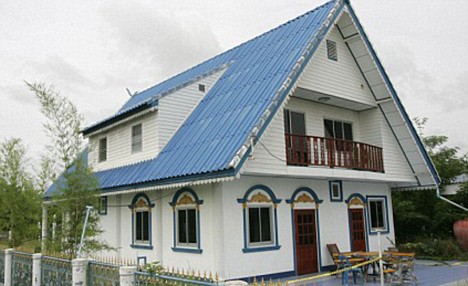 But under Thai law, as foreigners cannot own property he had put it in his wife’s name.
‘I thought she loved me but she just wanted my cash,’ penniless divorcee Beeston , who arrived in Thailand with Ãƒâ€šÃ‚Â£350,000 told friends at the time. He then asked his wife to leave the marital home and live in a shack with corrugated iron roof nearby. (below) 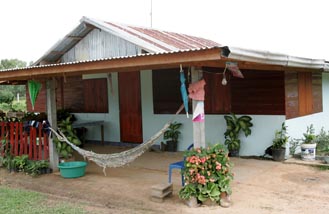 And he began selling all moveable objects in the house and restaurant piece by piece to survive until he could legally get the funds to return home.

‘It was like he has signed his own death warrant,’ said neighbour Andrew Herrington, 51, a retired HGV driver from Sheldon, Birmingham.

‘His wife  lived behind the main house with her Thai boyfriend. Every time we went to visit she would come out and scream and order us away. ‘This is my house. This is my land’, she would shout.

‘I was due to meet Ian on Sunday. We had to meet on the main road near his village, because his wife would create a fuss if any westerners came. But he never turned up.  I was very suspicious.

‘Ian knew that he was going to be murdered. He had already complained that while he was away she had put something inside a beer in his fridge.

‘He had felt ill. So he sent the beer away for analysis to a local hospital. He was awaiting the results.

‘But it was an open secret in the area that Ian was going to be murdered.

‘When she arrived in the village she took her husband bearing gifts to all the police and local dignitaries.  But she had a secret police lover too.

‘When I recently went home to Birmingham a policeman told me ‘ Perhaps your friend will not be alive when you come back’.

‘So when I went to his house on Sunday and saw his car was there and the house locked up,  I knew then his time had come.  His wife came out shouting at me and my wife to go away. We decided to call the police.

‘When they came they found his badly beaten body. I identified him.  Only the week before he had been at my house to collect a box of Mars chocolate bars.  He did not like the ones made in Asia.

‘Ian was a nice and charming man, always helping others. He helped me with the wiring in my house and he designed my stairs, but he would not take a penny.  But secretly he was broke and he had nowhere to go once his home had been taken away from him.’

Another neighbour Australian Bill Lamb, from Woolagong, nr Sydney said: ‘Ian was a lovely chap. But whenever we visited his wife would come out from behind the house and shout at us.  She complained to the village chief to keep us away. 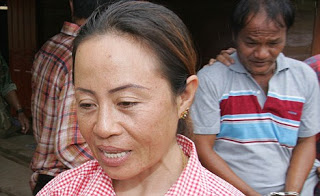 ‘Ian was helping me with some welding. He was a jack of all trade. He told us all he was going to be murdered, and quite frankly we believed him, and thought so too.

‘Friends had brought him a stun gun, a tazer, to use to protect himself.  We wanted him to go home to England but he was spending his last pennies trying to get his property back.  He was due in court today.

‘For the last three months he had been a prisoner in his own house.  We have been bringing him food, but he has been living on mashed potatoes.

‘The grass around his house has grown because his wife has chased the gardeners away. He was a very tidy man.’

Police Captain Patapong Patniboon of Suwannaphum Police said: ‘Ian Beeston’s wife and a Thai friend from Petchabun Province, Somchit Janong, 48, have both been arrested for her murder. We have assured the British Embassy that the investigation will be thorough.’ 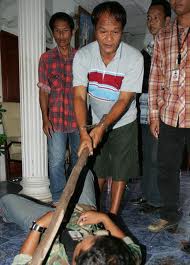 Yesterday Province, Somchit re-enacted the crime saying he did it for ‘Wanna’.

A British Embassy official said that attempts were being made to trace Beeston’s grown up children, whom had moved abroad, and his ex-wife.

*Three years ago Briton Toby Charnaud, a gentleman farmer aged 42, was beaten to death barbecued and his body fed to the tigers in Kaeng Krajan national park in Thailand after he divorced his Thai wife and removed her from his will.  She was later charged and convicted with other relatives.