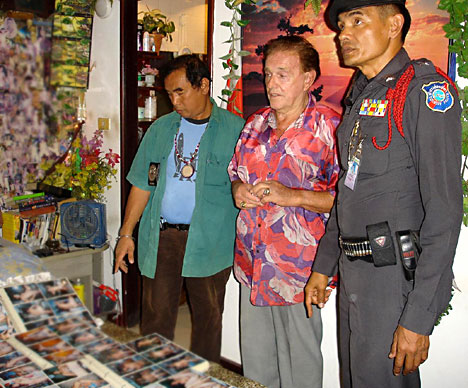 A British pensioner has been arrested on paedophile charges in Thailand after police said he had been found in possession of 100 times more pictures than infamous paedophile Canadian Christopher Neil, whose swirly disguised face was unmasked by police, put on the web.
74-yr-old Alan Charles Mawson, from Barrow-in-Furness was seized after police raided his retirement flat in the Diana Estate in the sex resort of Pattaya, 100 miles east of Bangkok.
Mawson was charged with having sex with a boy under the age of 15, and also possessing pornographic images. Six digital cameras were also seized.

Alan Mawson is arrested by Thai police in posession of more than 20,000 obscene images
Images of Mawson’s flat showed the walls were covered in images of naked youths, but many were clearly over the age of 18 and looking like bar workers.
He had 104 photograph albums each containing over 200 pictures.
But Tourist Police General Chuchart Sawanakom said that police were taken the case very seriously.
‘On October 4th between 2 and 3p.m. Mr. Mawson had sex with a minor in his apartment. He can go to jail for a number of years’.
Last week Canadian Christopher Neil was arrested in Thailand after a worldwide hunt.
He was nicknamed ‘Mr.Swirly’ after German police managed to’unswirl’ one of 200 obscene pictures of him engaged in sexual acts with boys which he allegedly put on the internet.
Daily Mail story here