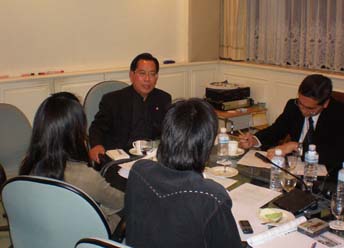 Damning new evidence has emerged in the case of two Canadians shot by a policeman in the northern town of Pai last month after two eye-witnesses to the drama sought protection from the National Human Rights Commission.

The witnesses, (pictured with Human Rights Commissioner Surasee Kosolnavin and DSI Colonel Piyawate Kingkate) a young man and woman from Chiang Mai, told the NHRC they were scared to give evidence to police in the North, so the commission helped them gave their account of the fatal shooting to officers from the Department of Special Investigation (DSI) in Bangkok.
The witnesses, who identities were not revealed, told the DSI that Sgt Uthai Dechawiwat had intervened while Carly Reisig was fighting her Thai boyfriend. The officer kicked Reisig, then hit her with his pistol, but she pushed it away, and he shot her in the chest.
He then shot her friend Leo Del Pinto, 24, twice.
They claimed del Pinto had his hands in the air and was yelling at the officer to ‘Stop! Stop!’ They said Sgt Uthai was drunk.
The witnesses’ account is greatly at odds with the police report of the drama in the early hours of January 6. Sgt Uthai has claimed the two tourists attacked him after he confronted them about a fight and that his gun discharged accidentally.
News of the witnesses came out yesterday when Reisig, 24, went to Mae Hong Son Court to testify about the shootings. She was escorted to the court by officers from the DSI.
Sgt Uthai was summonsed to answer charges of murder and attempted murder. He pleaded not guilty to both.

Reisig told the court she was on the ground and had been fighting with her boyfriend Ratthapon because she said he had failed to feed her Labrador dog ‘Magic’. Leo had tried to separate the couple when a man she knew as Sgt Uthai approached.
‘He came and kicked me in my side as I was trying to get up. He was shouting in Thai and pointing a gun at me. I pushed the gun away then he hit me over the head with the gun and I fell to my knees. As I fell he shot me just below the chest.
‘I looked up and saw Leo was shouting ‘Stop! Stop!’ He had his hands in the air. The policeman fell back over a motorcycle then recovered and he fired twice.
After the first time Leo put his hands to his stomach and went down. Then he shot down at Leo as he fell.’
The new evidence had been gathered by a special team made up of members of the Human Rights Commission led by former public prosecutor Surasee Kosolnavin and officers of the DSI, under Colonel Piyawate Kingkate.
Commissioner Surasee said: ‘What is the most telling point of all is that police have give evidence that the bullet which hit Carly Reisig also hit Leo Del Pinto.  It is not possible. So we are starting from that point and going back.
‘There are reports that the policeman had been charged with murder and attempted murder, but no such charges were placed. They have, however, been put to the officer today and we will be referring the case to the governing board of the DSI and recommend they take over the investigation.’
Also involved is Dr Pornthip Rojanasunan, Thailand’s top independent pathologist, who has been studying post mortems carried out in Calgary, Alberta and Chiang Mai. Dr Pornthip has already rejected police claims Leo Del Pinto was shot from below as he was falling to the ground.
‘It’s just not possible, what the police say. Evidence shows that the gunman was above Leo when he was shot in the head.’ she said at the Maharaj Chiang Mai hospital after studying medical records.
by Andrew Drummond
Special to The Nation