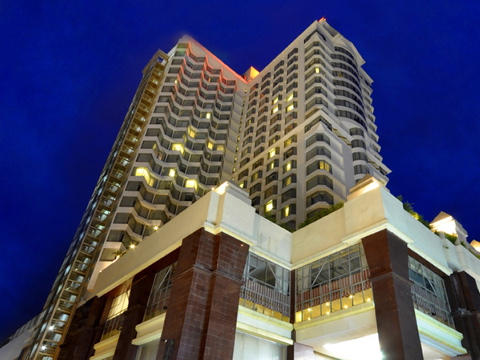 An English coroner has expressed dissatisfaction with a Thai police report on the death of 40-yr-old Yorkshireman Edward Fairburn who fell from the Centara Group’s Duangtawan Hotel in Chiang Mail last year.

Halifax Coroner Roger Whittaker said: ‘I have grave concerns over the lack of information I have particularly in relation to how Mr Fairburn came by his death.

‘It seems the Thai police have reached the conclusion that there were no suspicious circumstances but they have not provided any information on why they took that view.’

Mr Whittaker said he had asked the Foreign & Commonwealth office to ‘delve further’ into the case. An inquest due to resume this week is likely to be adjourned for the report.

Under a page one story in the Halifax Courier in Yorkshire, England, headed ‘Heartbreak family ask how did he die!’ the relatives of Fairburn, who had lived in Thailand for six years, say they received a phone call from him shortly before his death.  They have not revealed what was said during that call.

His mother Brenda Corbett was quoted as saying: ‘It’s horrible. We cannot grieve for him because we do not know how he died. But at least it’s being looked into.’

His sister Linda Elliott said: ‘ When we tried to get information from the Thai authorities we kept hitting a wall.’

The Duangtawan Hotel, near the city’s Night Bazaar has sealed guest room windows.

Last year the Chiang Mai Mail newspaper reported that Fairburn’s shattered body was found at the foot of the hotel near the Maekha Canal.  His passport, credit cards, and 7,200 baht were found in his pockets.

Mrs Suthasinee Jaiman, and employee of Giant Beauty Salon located opposite the hotel, was reported to have told police that she had seen the man smoking near the fire exit doors on the 12th or 13th floor of the hotel. Shortly after that she heard that a man had fallen off the hotel and when she went to the scene saw it was the man she had seen smoking earlier.

The newspaper also reported that Police believed the man jumped from the 24th floor of the hotel. The unexplained  conflicts in the report no doubt confused the family.

Fairburn a keen footballer who played for local pub teams in Halifax was a happy man, said his family, who enjoyed life to the full. He has three children.