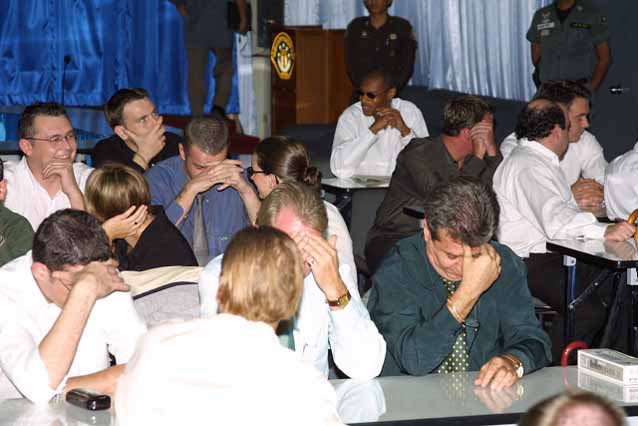 From ANDREW DRUMMOND,
BANGKOK
MAY 6 2011

Britain’s secretive Financial Services Authority have begun operations in Bangkok in a bid to rack up their operations against international boiler rooms a few notches.
A team has been in the capital for the last week engaged in discussions with officers at the Crime Suppression Division and counterparts in other Embassies including the Australian and Canadian Police.
Part of their enquiry is linked to the recent raids on boiler rooms in central Bangkok, other parts are historic and relating to past boiler rooms, but their main aim is to ensure people operating boiler rooms do some real jail time.
Historically in Bangkok operators of boiler rooms, ‘illegal share trading houses’ have escaped any serious justice. They have been fined for breaking SEC regulations and some of the traders have been deported, but the fines amount to a mere spit in the ocean, in terms of the profits they are making.

Boiler room boys in a raid on offices in Bangkok many years ago, Most were just deported, the bosses fined
FSA investigators, who comprise ex-police fraud squad officers,  are also racking up prevention measures. In some cases they have obtained the same ‘lists’ which the boiler rooms are working from and are able to warn callers in advance.
They have also noted the rise in ‘techies’ in the boiler room business who are becoming as important as the ‘loaders’. The ‘techies’ go on internet fishing expeditions to find clients.
Boiler rooms operators have always considered themselves ahead of the game, and ahead of the FSA. They openly boast about operating with high ranking Thai police. In that knowledge the FSA are expected to go ‘political’.  That may involve joint approaches from several governments at the same time.
They are also working alongside police who are not tainted.

A boiler room in Phnom Penh raided two years ago
The FSA are operating alongside another investigation, this one private, which is engaged in nailing boiler room assets in South East Asia.
‘People who work for these operations cannot convince us, let alone themselves, that they are not committing fraud.  We do not support deportations, we want these people doing real time,’ an FSA source said.
Thailand, he added, had become the new Spain for these dodgy operators many of whom had relocated from there because of official heat. The FSA are however working from several advantages. Many of the bosses have settled down with Thai families. They don’t want to leave and charges are being prepared in their home countries if they run home.  There is no shortage of countries for them to run to but they have moved to Thailand for its ‘life-style’
“The younger ones come to Bangkok and, even when they discover what they do is illegal they do not want to leave. They are offered unlimited girls, and parties, and throw ethics to the wind.”

The FSA has similar powers to SOCA, the Serious Organised Crime Agency. But what they do not have is funds to counter funds used to pay police. Their enquiries will not be restricted to Bangkok but also Chiang Mai, Pattaya, Phnom Penh, Manila, and Hong Kong.
A lot therefore depends on the will of the current and any future governments in Thailand.