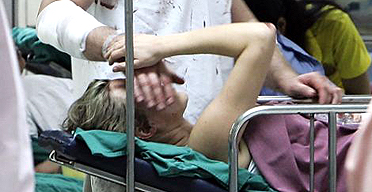 Two die as bomb blasts hit new year celebrations in Bangkok
ÃƒÂ¢Ã¢â€šÂ¬Ã‚Â¢  British tourists among the injured
ÃƒÂ¢Ã¢â€šÂ¬Ã‚Â¢  Nine explosions across the Thai capital
Andrew Drummond in Bangkok
Terrorists brought carnage to Bangkok’s new year celebrations last night with a series of bombings that started early in the evening and ended at the stroke of midnight.
Two people were killed and at least 36 people ‘ including two Britons ‘ were injured, many of them seriously.

No one claimed responsibility, but General Ajirawit Suphanaphesat, the national deputy police chief, said that Muslim separatist insurgents were probably not behind the blasts.
During the first wave of attacks in the Thai capital, in which the two victims died, six bombs went off at 6.30pm. Then at the midnight countdown, three other explosions were detonated in areas frequented by tourists.
The first two midnight blasts were near the former World Trade Centre, now renamed Central World. The tourists known to have been hurt were two Britons, one American, a Hungarian woman and two Serbs. They appeared unaware of government warnings to keep clear of these sensitive spots.
A third bomb was detonated at a shopping mall. Two other bombs were found before they exploded. One was in the popular Suan Lum Night Bazaar, a night market specialising in Thai cultural products such as silk and ornamental carvings, and another at the Buddy bar in the backpacker area of Banglampoo.

The Britons being treated at the Police Hospital in Rajamdamri were named as Alistair Graham, 47, a Scot, and Paul Hewitt, 55. The six earlier bombs wounded 14 people seriously, while the rest were treated and released from hospitals, Mongkol Na Songkhla, the Health Minister said.
The first six bombs at 6.30pm were set off at apparently meaningless and random targets throughout the centre and, in the main, off the main tourist track. The bombs at midnight were at locations where foreigners mixed with Thai friends. But the Buddy Bar in Khaosarn Road, Banglampoo, which featured in the film The Beach, is patronised almost exclusively by foreigners.
Almost immediately after the 6.30pm explosions the Bangkok governor cancelled public new year celebrations planned at the Central World, Siam Paragon, a trendy shopping mall packed with designer brand shops and international restaurants, Khaosarn Road, and Sanam Luang (Bangkok’s Hyde Park). But many people, particularly foreign tourists, had not heard the call and gathered together anyway.

On the new year countdown two bombs exploded at Central World, one in a telephone booth and another hidden in a tyre on the side of the nearby Saeng Saeb canal. A third bomb exploded at Gaysorn Plaza, a shopping mall similar to Siam Paragon. None of the bombs had the hallmarks of Islamic insurgents, a problem facing six provinces in the south of the country.
There was considerable speculation in Bangkok that the bombings were linked to angry supporters of the ousted Prime Minister, Thaksin Shinawatra, who fled the country during a coup in October, and who had been accused of enriching himself at public expense.
Mr Thaksin has been living in exile splitting his time between London, where he has a home, and Beijing and Hong Kong.
Several embassies’ websites advised their citizens to avoid Bangkok’s city centre. The British Embassy urged people ‘not to travel into the city until further notice’, while the Australian Department of Foreign Affairs and Trade cautioned that ‘there is a possibility of further attacks in coming days’.