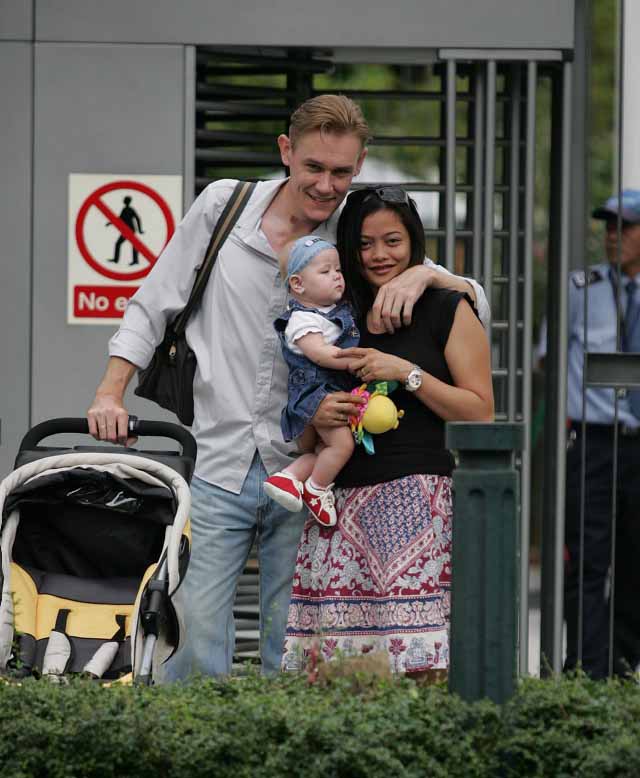 A couple who fled to safety in Bangkok after being banged up in the Philippines on adultery charges are to feature in ‘Locked Up Abroad’ on National Geographic Television this week.

David Scott, from Swindon, Wilts, and Cynthia Reyes, from Manila, made their break for freedom after colleague Andy Chant and myself took up their case in the media in the UK.
At one time it seemed their backs were completely against the wall. Divorce is of course illegal in the Philippines, but if you have a lot of cash it is possible to get an annulment provided both parties agree and one party admits to be mentally unbalanced.
Scores of Filipinas and foreigners may be committing adultery every day as many women in the sex trade have broken, but still legal, marriages. Cynthia was decidedly not in the sex trade. She was actually head of housekeeping at a hotel in Dubai.

David, Cynthia and baby Janina outside the British Embassy in Bangkok after getting the good news
David and Cynthia had met on the internet and he flew out to meet her in Manila.  She got pregnant and when he flew back for the birth both were arrested at gunpoint by police and jailed on the orders of Cynthia’s estranged husband, who had heard about the relationship and apparently saw an opportunity to make some money.

When their child was born just a few days after getting bail British Embassy officials told the couple that under Philippines law Cynthia’s estranged husband was the father. Everywhere they went the couple was faced with demands for cash.  They  finally had to buy themselves out of the country through Immigration.
Right: Cynthia and baby Janina on the flight from the Philippines
In fact this was a financial merry go round with seemingly almost everyone wanting a piece of the action. Luckily friends back home manage to raise to cash for David and Cynthia and their case was taken up by a sympathetic British M.P.

Having escaped to Bangkok David and Cynthia spent half the time at my home and half the time with my colleague Andy Chant, while DNA paternity tests were done and the Home Office in the UK finally relented and agreed to admit the family into Britain and notified the British Embassy to issue the relevant visas.

I am reminded of this case on a weekly basis because it was about the first time I went to a nearby Tops supermarket and to this day the account is under my home phone number and David Scott’s name.
Here are some links to the original stories and the National Geographic promo.
David & Cynthia at andrew.local

Why wont the Foreign Office help us?