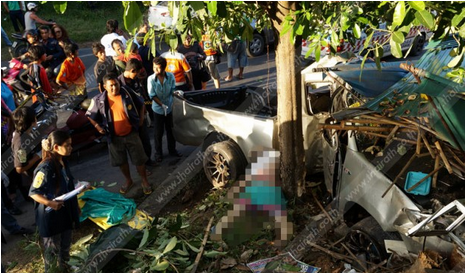 It was a tragic story. Two friends both pensioners from Rochdale in Manchester were mown down in March this year by a Thai driver on Koh Samui.

Derek Gent and Michael Holmes had known each other for 30 years. Derek was former head of Oldham Trading Standards Office. Michael was in sales. They were both killed in the wake of a crash between a Toyota and a truck which had been overtaking.

Witnesses were found and the truck driver Chamnan Choowaree was charged with causing death by dangerous driving and the file was sent for prosecution.

Witnesses have said that the truck driver over took a Toyota Corolla on a blind bend and had to pull in sharply, clipping the car and putting them both into a spin.

Derek, 69, and Michael, 68, described as two popular and charming friends, who had known each other for 30 years, had walked out of the Rocky’s Boutique Hotel and found themselves in the path of the vehicles. The truck was partially wrapped around a tree indicating the high speed it was doing.

Derek and Michaels’  grown up children put out a joint statement at the time: ‘Our mothers Janet Holmes and Christine Gent have been overwhelmed by the kindness and support they have received from the employees of the resort where they were staying (Rocky’s Boutique Resort), the Thai people and the holiday company they travelled with (Kuoni).’

But now the family are feeling angry and frustrated. Today they were told that the case will not be heard until July 14th 2014 and could take a further year to complete after the diver pleaded not guilty.
That statement of gratitude has now turned to bad feelings.

Comment: How far does support for foreign victims go in Thailand?  Is it only skin deep? Is it now business as usual?


The truck driver pleaded not guilty.  I am guessing he might not have done if the victims had been Thai. There would be some pretty hard negotiating going on.


But worse;  it makes you wonder how a rich Thai fruit manufacturing can get a case into court against British Human Rights Campaigner Andy Hall* so quickly and sue him for US$10 million damages, and how much compensation this family will get at the end of the day.


It’s not surprising the family telling me they have reacted with grief and anger.


Koh Samui is a holiday island. While the court there is new, how much crime is there that they cannot deal with this case quickly and efficiently; that it is a serious matter killing two people with a motor vehicle?  Is there something we are not being told?


It is sending bad signals to the west.  It’s certainly telling me not to go there.  Guests on the island are only good as long as they are paying.


And if the locals do not care, what about the travel company.  Each year  Kuoni sends thousands of Britons to Thailand. Could they not write to register their protest?  And will they put this in their next brochure? Better still will they publish the Foreign and Commonwealth Office’s Travel Advisory on Thailand in their next brochure. It should be made compulsory even though it pulls a few punches.


Of course it would not have helped in this case. These guys were just taking a stroll. But, wait a minute, they could start another section under ‘Taking a Stroll in Thailand’. Any ideas?


* Natural Fruit Libel case. They have got the case into court – but not Andy yet.

*Family may have to wait for years. This is based on the assumption that the court will sit one day each month and only be able to deal with a maximum of two witnesses each sitting. It also takes into account the failure to appear of police and other witnesses and even the defendant and of course if they want to sue for damages then the children will have to start over. The UK Foreign Advisory does not spell this out, nor indeed possible other influences of courts.

* An arrest warrant will be issued for Red Bull Heir  Vorayuth Yoovidhya, 28, after he failed to turn up for trial for running down and killing a policeman. in his Ferrari sports car – it was reported today.

UK Foreign Advisory – Thailand
Farang Exits – Not for the squeamish