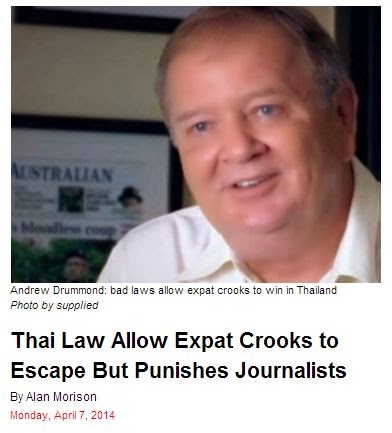 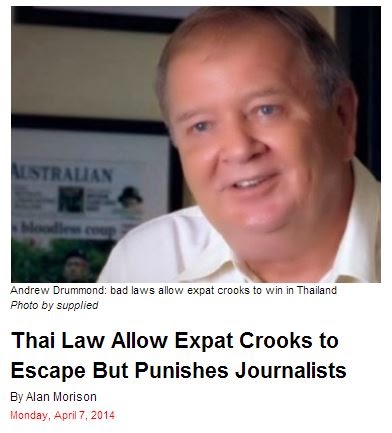 A report on the website Phuketwan today says British journalist ‘Andrew Drummond is irreplaceable’. And it adds that if he was forced to leave Thailand ‘the crooks will be free to continue their shakedowns and rip-offs, without scrutiny’.

The report is a part of a series by the online site based in Phuket to mark World Media Freedom Day and is written by Alan Morison, who with a colleague Chutima Sidasathien as well as Andrew Drummond and human rights activists Andy Hall, is under attack from people taking advantage of Thailand’s Computer Crime Act and Criminal Libel Laws.

Phuketwan also reports that Andrew Drummond ‘has exposed killers, paedophiles and rip-off merchants of all kinds in a decades-long career as a foreign correspondent in Asia – including Gary Glitter’.

Do not of course believe that if Andrew Drummond leaves Thailand that the crime figures will shoot through the roof.

No such claim has been made by Andrew Drummond that he is actually reducing crime.

In fact most of the cases he investigates are not recorded on Thai crime statistics.

But certainly, he says, he can make life very uncomfortable, for people who come from abroad to commit crimes in Thailand.

“It’s up to the foreign police forces to deal with their own criminals who come to Thailand. But in general they are involved with crooks who have already committed crimes abroad and are wanted back home.

“They also get involved in international narcotics matters.

“But if foreign crooks decided to get involved in crooked business here quite often the Thai police will either not understand, or not care as they are merely ripping off other foreigners, and with the language problems they sometimes cannot tell which foreigner the villain is.  Foreign criminals are as a rule not so dumb as to cheat Thais.”

Andrew Drummond who as a journalist has attracted about  in Thailand 2/3rds of the number of all libel suits in England and Wales for almost any given year, has been winning his cases – but at a cost.  Thankfully he has been supported by readers.

The Phuketwan says he is looking longingly towards Britain. That’s true because, he says, Thailand cannot offer his children a good enough education.

To read the story on Phuketwan go here.

Apart from keeping tabs on foreigners murdered in Thailand Drummond also tracked down Gary Glitter in Vietnam, where he was arrested, jailed and later deported on child sex abuse charges.

Among his first stories involving foreign criminals were the cases of Tony Clements and Glyn Croft in Pattaya.

These two, formerly associated with the ‘Charlie Richardson’ gang in the UK, began an enforcement business in the resort.

Clements was shot dead and subsequently Glyn Croft approached Andrew Drummond to give himself up to the British authorities (He had absconded from jail in the UK).

Croft’s particular forte in the UK was to roast his victims over two bar electric fires. As these did not exist in Thailand he had to find other means.

One of Drummond’s adversaries and a subject of one of his exposes is Brian Goudie (above) was jailed for six years under the name Brian Goldie in Australia but in Thailand re-invented himself as a British barrister. He is currently on trial for posing as a barrister to defraud a 75-year-old woman out of almost US$300,000.

More recently after Drummond interviewed Walter ‘Whacky’ Douglas in Samui – a man long associated with organised crime –  he was arrested in Koh Samui and sent back to the UK by Thai police and officers of the National Crime Agency.