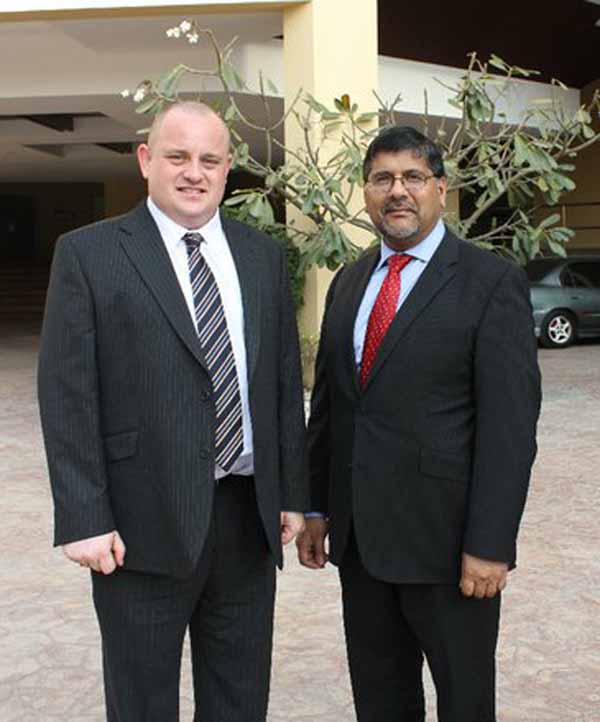 Arise Sir Howard of Walking Street?
From ANDREW DRUMMOND
April 27 2012
Howard Miller one of the most famous Brits in Pattaya and almost on a par with the legendary Barry Kenyon, MBE,  his predecessor as Honorary or Corresponding Consul, has been nominated for an award for ‘exhibiting consular excellence’.

The award known as the “Directors Award Scheme for Exhibiting Consular Excellence” comes of course after Mr. Miller resigned his post either because (a)  there appeared to be no room in the new set up in Pattaya or (b) he had too many pressing work projects (c) he was really pissed off.

Howard Miller with outgoing Ambassador Asif Ahmad during a backslapping trip to Pattaya after the ‘Hewitt Incident’
Miller runs the gloriously straight but tame Pattaya One News, and Pattaya 105 radio, plus some other website, and is now branching out into the real estate business, as Pattaya is in need of more property dealers one can trust.

But he may be best known for his role as the ‘Gruppenfuhrer’ in Gavin Hill’s classic nouveau cinema verité series ‘Big Trouble in Tourist Thailand’ where Howard, as head of the Pattaya Volunteer Tourist Police Assistants, was seen to ably guide all sorts of male sex tourists out of veritable nightmares of their own making.

The award was recommended by the Consular Director at the Foreign Office in London and HM Consul in Bangkok whom he thanks on his Facebook site.

I rang him up to congratulate him and he said: ‘Oh no please do not slag me off. Keep the Sporran away!’

Howard took a bit of a hit over Briton Richard Hewitt, who was found, naked, emaciated and seemingly close to death in the Pattaya lock up last year. Hewitt had to be rescued by, not by a consular official, but by a private citizen.

The publicity took the normally on the ball and helpful consular rep rather aback.

“Why me?”,  he could almost be heard thinking, after the event as the Thai-Visa pundits wound themselves up into top gear.

Had he seen the Hollywood film ‘The Paper’, a day in the life of a New York tabloid,  he would have known the reply – ‘It was just your turn!’

Anyway congratulations to Howard Miller and many successes in your new ventures.

Postscript: I should also add that Howard Miller is so well known that he was even impersonated by Drew Noyes on www.scandasia.com see these comments.