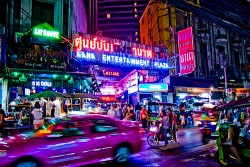 An Australian Naval officer has lost his official computer after picking up a ‘lady boy’ in a Bangkok red light area.

The officer Lt. Commander Peter De Maskens, a qualified helicopter pilot, was in Bangkok on official business  and had gone out for the night to the city’s Nana Plaza, an entertainment zone in the city full of ‘a-go-go’ bars, and where ladyboys also solicit in the streets..

The Lt.Commander De Maskens, a recipient of the Medal of the Order of Ausralian, for meritorious service in the field of maritime communications and information systems, is reported to have asked the lady boy to go back with him to the city’s Banyan Tree hotel, but told Embassy colleagues later that he did not know that his date was a man.

The Lt.Commander De Maskens, formerly based at HMAS Albatross, at Nowra, NSW,  (Motto: Ever Watchful)  reported that he ‘blacked out’ inside the hotel room and did not wake up until the following afternoon. Meanwhile his lap top computer, cash and personal belongings had disappeared. He could not remember anything after entering his room.

Normally unregistered guests at the hotel, used regularly by the nearby Australian Embassy, have to hand over their I.D. cards before entering a guest room, but last Friday night the rules were apparently relaxed.

As a result, coupled with the fact that the lady boy was not paid out from one of the five lady boy bars at Nana Plaza , police at Thungmahamek police station, Bangkok, have little evidence to go on, and have called for the hotel’s CCTV videos.

In another incident across town at the city’s Mercure Hotel on the same night, a lady boy drugged a Korean client, police reported, but she was stopped as she left the hotel with the Korean’s belongings.

An Australian Department of Defence spokesman today insisted there was little vital to the security of Australia on the officer’s computer, but in any case the thief would not get past the computer’s built in security.

In a brief statement the department reported: ‘A Navy Lieutenant Commander staying in Bangkok has had personal belongings (including a Defence-owned laptop computer) stolen from his hotel room.

‘The laptop contained only the lowest classification data and was fitted with appropriate security software to deny access to any information on the computer.

‘The incident is under investigation and no further details are available at this stage. The Lieutenant Commander has received the assistance of the Australian Embassy Bangkok and the Thai authorities’.