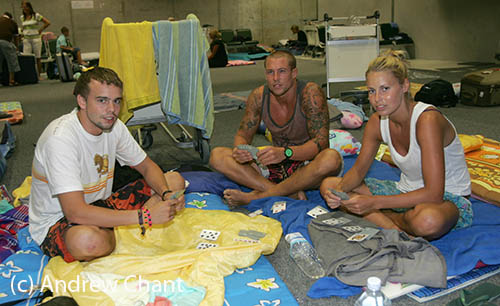 Britons stranded in Bangkok since
the Icelandic volcano erupted last night accused international airlines
of being devious, dishonest, and telling outright lies, to avoid their
responsibilities to their passengers.
As some Britons slept for the eighth night at Suvarnabhumi
International airport with only a trickle finding seats back to London
the airlines were accused of :
ÃƒÂ¢Ã¢â€šÂ¬Ã‚Â¢ Smuggling VIPs onto flights through ‘staff’ check-in desks to avoid angry confrontations
ÃƒÂ¢Ã¢â€šÂ¬Ã‚Â¢ Denying they have seats but offering them on the internet for up to Ãƒâ€šÃ‚Â£3000
ÃƒÂ¢Ã¢â€šÂ¬Ã‚Â¢ Refusing to accept FIM – Flight Interruption Manifests – in favour of cash buyers.
The FIM, flight interruption manifests are reports by which one
airline can purchase seats on another airline when difficulties arise.
Yesterday Tesco’s, and Boots, both of which have large operations in
Thailand, came to the rescue of some 300 stranded Brits in Bangkok,
supplying bedding and toiletries.
And the British Embassy also handed out books and toys for families
with children. There was high praise for the Embassy operation and also
for staff at Suvarnabumi airport who provided three meals a day and also
distributed cushions, donated by Singha Thai beer, and Dunkin Donuts
who provided their sweet snacks.

But nothing could hide the passengers’ anger.  A sign in the basement
area where the tourists have set up their beds read:’ ‘Remind the
British Government and press that we still exist. Join the Facebook
group named ‘Stranded Brits Abroad’  I think the time of being polite is
now over’.
Tracey Groves, 42, a former Business Travel Consultant from
Braintree, Essex, travelling with her husband and twins Harry and Sophy,
said: ‘We are travelling by Thai Airways. They said they had no seats,
but when I checked on their internet website I was offered two tickets
to fly out on Tuesday for 300,000 Thai baht. That’s about Ãƒâ€šÃ‚Â£6,000!

‘I called an Embassy official over to look at the screen. It was unbelievable. ‘
Added her husband Phil: ‘ I went with the Ambassador Quinton Quayle
to the Thai Airlines desk and demanded to know what the airline was
doing, but the Ambassador asked me to stay cool.’
Added Tracey: ‘To make matters worse I saw a Thai passenger being
taken out of the standby queue to another desk where he was given a
boarding pass.  I demanded to see his ticket.
‘He said he was staff. So I told him that in that case he should give way to paying passengers.’

Daniel Greenhill, 19, Russ Camm, 29, Kim Mellor, 26
Russ Camm, 29, an IT Consultant, from Leeds, travelling on Indian
based Jet Airways with his girlfriend Kim Mellor, from Stoke on Trent
said: ‘We have been faced with nothing but dishonesty, and occasional
sarcasm.
‘I have a letter in writing from Deepak Sharma, the Jet Airways
Bangkok airport manager. He states specifically that airlines are
refusing to accept FIMs and instead are charging passengers’ cash.
Everybody is trying to avoid their responsibilities’
Another Jet Airways stranded Brit, Daniel Greenwell, 19, from
Northampton, an engineering student at Liverpool University said: ‘I
have been sleeping here since the 17th, people who arrived after me have
left.  Jet Airways say now they can fly me to Amsterdam tomorrow, but I
will have to find my own way to London.
‘These people have been virtually impossible to deal with. They have been telling me absolute rubbish for the last nine days.
‘What has made things bearable has been the Thais who seem to enjoy
helping us. They have looked after us in many ways and I cannot thank
them enough.’

At last a bit of sleep. Exhausted pensioner Evans nods off behind his new friend in adversity Chris Trace
Pensioner Michael Evans, 69, a retired Overseas (Hungary) director of
Powergen from Ashton Under Hill, Worcs., went to Thailand on holiday
with his wife Caroline, 45,to celebrate their 45th wedding anniversary.
But now he is bedding down at the airport and his wife is staying in a
nearby hotel.
‘Things are tense. I’d rather save my marriage, and I am only half joking. This is taking a terrible strain.’
With him was Chris Trace, 50, who had also left his wife, Lesley, in a
local hotel. He said: ‘I was due back on Monday for my mother’s funeral
but nobody as Thai airlines care about that.
‘We have seen all sorts of people being added to the Thai airlines
list who have not even bothered to queue at the airport.  It’s a total
shambles.
‘There are tickets out there but they are costing nearly Ãƒâ€šÃ‚Â£3000.  My
wife works as a school administrator,  but her contract does not cover
this and she will not be paid for the time she is absent.’

Late last night a British Embassy official said that Thai Airlines
had confirmed that had laid an extra flight on early Tuesday morning.
But there are still an estimate 2,000 other stranded Brits staying
outside the airport.
British Airways passengers have been more fortunate. The airline has
provided food and hotel accommodation while flights get back to normal.

Comment: I am not sure how many home goals were
scored by the airlines over the last week or so but Thai Airways and the
Indian based Jet Airways were at the top of this league.  Of course
those of us who live in Thailand know of the Thai inclination never to
pass on bad news.  It starts when we get in our first taxi in Bangkok
and the driver insists he knows where he is going.  But the accumulative
misinformation given to stranded passengers over the last was worthy
of  bush airlines flying Dakotas with doors held closed by string, not
by a major international airline.   And it was Thai airlines ground
staff, who through no fault of their own took the rap.  This was all
such a shame when you compare that with with the first class and
cheerful Thai care provided by staff of Suvarnabhumi airport, who called
in help from Thai companies to supply bedding, food, and even free
massages.
Similarly Jet Airways do not come out of this fiasco smelling of
roses. Well, okay, its a comparitively new budget airline based in
India, and it seems some airlines would not accept their FIM tickets.
But on long haul flights, one can’t really get away with the O’Reilly
type savings, or just shrugging things off, or boasting about your
leather seats.
The passengers stranded in Bangkok had been advised to stay at
the airport. They did not know about the other games being played within
the travel industry and how other passengers received better favours
from the luxury of their hotels.
Anybody could have become victim to what happened last week. How
airlines treat their customers determines which league they are in and
even people flying budget should have an expectation that they will
reach their destination within a week of departure.