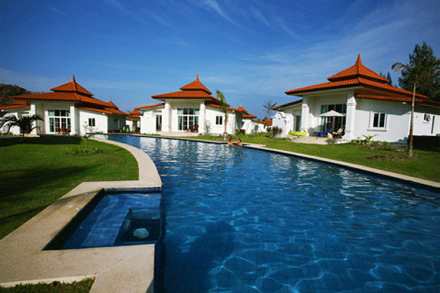 …….Well, actually since they bought it the developers have removed the name ‘Golf’ from their website, or refer to the Banyan Resort, and add, perhaps as an afterthought ..’and golf’.

This may have something to do with the fact that there is NO road as promised or even near access to the golf club in question.

One of the buyers points out: ‘It was a complete con. The road to the clubhouse, over a mountain, was never built, and it’s a 14 kilometre hike to the first tee. That fact that we had immediate access to the course was the premier selling point.

‘I have three golf courses nearer my home in the U.K.’

But never mind, perhaps they can console themselves in the fact that at least they are getting income in the meantime.

Sorry. According to the owners 2010 was a bad year for tourism due to Thailand’s political troubles, so owners would not get their ‘guaranteed’ cash.

Below is the letter sent to owners of what are termed ‘CD’ units on this upmarket, but incomplete resort.

The writer Bert Van Kappel said that the political demonstrations and economic problems had an an effect on the financial performance of the resort.

What economic problems? Is this why Thailand is trying to control massive inflows of cash.

And what about the effect on tourism?  Well, according to Prime Minister Abhisit Vejjajiva that has been zilch, zero. nada, nothing, sweet f.a.

If there was an effect in Bangkok it was more than compensated by the increase of tourists to places outside Bangkok, like, er, well Hua Hin.

Somebody is fibbing here or being economical with the truth. I know he is a politico but my money is on Abhisit, and thankfully not in Red Tulip Holdings, or Blue Lotus Hua Hin the holding company.

‘It was a record number of tourist arrivals, despite the country facing political problems and other negative factors over the past two years,’ he said.

Abhisit added that the tourism sector grew 7.5 per cent, while revenue was up 11 per cent.

‘If we can maintain this growth, the country will have twice as many visitors within the next 10 years.’

Prime Minister Abhisit Vejjajiva wants more ‘high end’ or ‘high quality’ tourists, the sort of people I guess who would like to play golf in Hua Hin.

But this is what happens to them when they come here. And its done by foreigners again!

Well lets not go into the complex business dealings of these companies, the frequent replacement of directors and shareholders, or make wild accusations of grand larceny or daylight robbery.

This after all is Hua Hin where property men entertaining local officials rule the roost.

The owners of course want satisfaction and answers from this extraordinary general meeting in June. So if you are an owner and unhappy you should email the following.

And my best of luck to you all. But please check in your AK47s, M16s, and tear gas at the door.