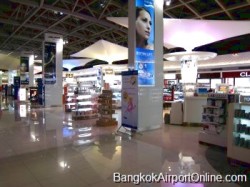 Police volunteer admitted that 160 tourists were scammed including six Britons.

‘No I dont want a laptop I’ve got too many of those. Jewellery will do.’

She sat there clutching a plastic bag containing a lipstick along with a till receipt for 570 baht. Sian, from Kilkenny in Ireland saw her life ahead in a Bangkok jail and was clearly dumbstruck.

‘I never intended to steal anything. I paid for the lipstick and had also picked up some eyeliner worth about 900 Thai baht and taken it to the till.  This is all a terrible mistake.  I paid by credit card. I thought I had paid for both items’
Sian faces a year in jail……unless.

Friday 4 pm: I am at Ratchatewa Police station just off the perimeter road at Bangkok’s Suvarnabhumi airport to see ‘Sian’ who had been shopping at King Power, the massive consortium which has a virtual monopoly over tourist duty free sales there,  when their security pounced.

I tell Sian (not her real name)  I am a journalist. ‘Oh this is not going to make the papers is it?  Please do not write anything’. I put down my notebook and pen.  I give Sian my telephone number and make my excuses and leave.
What I wanted to talk about, I could not say with the police officer present. The policeman, who I believe, thought that I had come to help the lady financially, asked why I was going so quickly.

Before her, laid out on the desk were colour stills printed on A4 taken from one of the thousands of CCTV cameras King Power have installed in their airport shops. Do they show she is guilty?I have no idea.

I cannot pursue this story unless she makes a complaint. To do so in Thailand could seriously jeopardise her future. She knows it. The lawyer knows it. The police know it, the courts know it. I know it. So I’m not expecting a call – at least not until she is safe back in the old country.

Guilty or not guilty Sian is now embroiled in one of the infamous Bangkok scams.  The scam is a variation of what happens in police stations all over the country but here it catches tourists when they are most vulnerable, often tired penniless and psyching themselves up for a long haul flight. Similar scams around the country account for why paedophiles are repeatedly released and why when we read about arrests we rarely read about the outcome.

Sian does not want any publicity. She was in Bangkok for a ‘Save the World’ type conference.

She has been told she will have to wait at least a month to go to court. She could go to jail for a year. She is another potential candidate for the TV series ‘Banged Up Abroad’.

Scammed? you may end up in this pink hotel

The option which has been given to all those tourists  from many countries,who have preceded her (several a week) is, of course, to pay up.  Police will keep the bail and she will be required to pay a large payment for letters which will say that police can find no conclusive evidence of her guilt and allow her to leave the country.

This scam is probably netting millions of Thai baht a month. Legally I cannot say where the money is going. But the first 100,000 baht bail goes to police and is not returned and the rest goes through a ‘fixer’, often a Thai speaking foreign police volunteer.  After the payments are made the victims receive a letter from the Prosecutor at Samut Prakarn Court saying a case has not been pursued through a lack of evidence.
If the prosecutor were to have been paid, and of course I cannot say that, then other officials at the court would normally be too.

Today Michael Sheridan, a colleague on the Sunday Times, exposes the case of Britons Stephen Ingram and Xi Lin. Sheridan identifies a Sri Lankan Sunil ‘Tony’ Rathnayaka as the fixer who extorts  the cash and pays it out to a man known as ‘Phua Yai Noi’ – the little big man. ‘ This pre-supposes there is a ‘Big Big’ man. Tony’admits taking the cash from the couple. He is only there to help, he says. He boasts he has three houses and does not need to do this for the money.
Ingram, a former Cambridge graduate, now an IT and electronics expert and Xi Lin, an IT consultant and BSc and Msc, were arrested and accused of stealing a Givenchy wallet worth over ?120.

The threat was all the more severe because (a) they were charged with organised crime (there were two of them) and that (b) the crime took place at night (when most European bound flights leave the airport) all adding to the severity of their case.

Guilty or not guilty King Power presented CCTV evidence as usual and claim, while they do prosecute severely, they do not prosecute without absolutely firm evidence. Nevertheless the video evidence is by far means conclusive and the couple were not caught with the wallet in their possession.

The chairman of  King Power is Vichai Raskriaksorn a polo playing acquaintance of Britain’s Prince Charles,  though maybe not a close chum because, although a promise that Charles son William will playpolo  in Thailand has been made it has yet come to fruition.

King Power say they cannot be held responsible for what happens in the police station.  For sure they know how the system works but its unlikely any management are involved – no matter what some people think of their prices.

In all cases they say they have solid CCTV evidence against the ‘shoplifters’ and have started to post the videos on their website.

In a written statement describing their ordeal Ingram and Xi Lin insist they were told that some of the cash would have to go back to King Power. But its only hearsay and police could just be upping the ante.
The couple were held virtually hostage for five days in a  pink love motel while their cash was ATM’ed here by the maximum amount possible per day (?300 each) and also transferred from the UK. Conveniently there were ATM’s at the police station and hotel.  Xi Lin had to use the ?5000 saved to start her Eton educated son’s university education.  From their statements they were scammed right up to the point of departure when ‘Tony’ demanded a further ?1000 to clear matters with immigration.  They claim that Tony, who they refered to as ‘Officer Z’ said that in April this year some 160 tourists had been nabbed at the airport, six of them Britons.  Apparently Tony no longer took laptops in lieu of cash as he had too many, but he would consider jewellery.

What stands out about Michael Sheridan’s investigation is that we have here for once, not the receipts for the bribes, but the letters which they obtained which showed they were innocent and allowed them to leave the country albeit at a price of ?8000.

The  first letter (left) is from Ratchatewa Police to Immigration police saying the couple can leave the country.

The second letter (below right) is from the Prosecution Office at Samut Parkarn which stated the court had dropped the case through lack of evidence.

And there we have it.
Personally, guilty or innocent I might not take my chances against Samut Prakarn court. But one worrying aspect about Ingram and Xi Lin’s testimony is a quote attributed to Kate Duffall at the British Embassy saying that people ‘had been arrested walking around King Power shops with goods in their hands’.  Dufall has not confirmed her statement.

However it is not difficult to see there may be some over zealous staff being used here, particularly if they have to pay out of their wages for goods that are stolen. In most countries one has to leave the shop first before theft can be established.

Mr. Ingram and Xi Lin have now been recommended a lawyer whom they say has been known to the British Embassy for 15 years and they want to pursue a matter through the Thai courts. I’m not holding my breath.

As the British Embassy may protest, there may be an investigation. But of course their standard quote is: ‘We will not interfere in another country’s justice system’

If similar cases in the past are anything to go by the Sri Lankan national will be the fall guy who will be presented to the press at a table with piles of 1000 baht bills in front of him.  And all local officials will be vindicated

Former Premier Thaksin Shinawatra, who gave King Power the airport concession did after all announce proudly: ‘There is nothing under the sun the Thai police cannot do,’ though I guess he meant it in a positive way.

So there you have it.  Be very very careful out there.

Finally just a reminder of another scam which has been widely reported.   Arriving passengers who stop to buy stuff at King Power duty free,  which are over the maximum duty free limit, have reported on the internet that their purchases are tipped off to the ‘Thai authorities’.  They are later stopped, not in the Customs Hall, but as they exit the airport.

NB This report has been edited from the original version. Sian did call back.  During our conversation she stated categorically that she took both items to the till and presented her credit card. When she signed the slip she thought she had paid for both items.