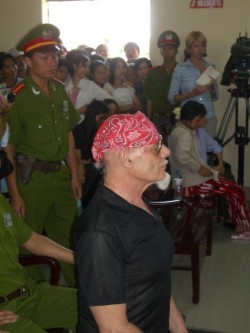 Link to The Times story
Link to ‘Tracking Down Gary Glitter’
From  Andrew Drummond,
Bangkok

Gary Glitter, the former rock star who was jailed for three years for abusing children in Vietnam would be deported back to Britain next, his lawyer said yesterday.
The statement appeared to contradict an earlier statement by lawyer Le Than Kinh that Glitter would be unaccompanied and free to go anywhere after leaving Vietnam.
But it is understood Glitter, real name Paul Francis Gadd, has been only provided with a one way travel document back to Britain, since his passport expired a year ago.
On his return to Britain it is understood that Gadd will be put on the paedophile register before being allowed to travel abroad again.
He has indicated in an interview with a Vietnamese journalist that he needed to seek medical and dental treatment in Britain as a matter of priority, although in that interview he said he would like to go to Singapore or Hong Kong where he had friends.
The Vietnamese Foreign Affairs department has politely declined work visas for foreign journalists intending to cover his release and asked that they respect Gadd’s wishes.
Le Than Kinh said last week that the fallen star, who had a cult following with songs such as ‘Leader of the Gang’ , would be escorted directly onto an aircraft by police and with a British official from the Consulate in Ho Chi Minh City.
He confirmed yesterday: ‘Police booked his ticket from Ho Chi Minh City to London and I have already paid for the ticket on his behalf.’
Glitter was arrested in the southern province of Baria-Vung Tau after journalists from a Sunday newspaper spotted and photographed him with young girls there.
A subsequent police investigation resulted in four charges of ‘lewdness with children’ aged 11 and 12, being brought against him.
An investigation into child rape was dropped after the parents of the two victims demanded US$10,000 and US$5,000 respectively.
Lawyer Le Than Kinh negotiated the compensation down to US$2000 each and the families then petitioned the People’s Court  to  stop the case in order  ‘to avoid further damage to the girls’ families’ honour and to the privacy of the victims.
Since the offences the girls have been returned to the care of their parents, and of two older girls  who procured the children for Gadd, one was now married and another has been sentenced and released from custody at  the Baria-Vung Tau Social Labour Centre, a rehabilitation unit.

When Gadd was sentenced to three years in prison the Chief Prosecutor of the People’s Procuracy of Baria-Vung Tau noted that in 1999 he had been ‘taken into police custody for two months by British police on a charge of storage of forbidden sexual photographs in a laptop’ and that in 2003 he was expelled by police from Cambodia.
After he was sentenced officers from Scotland Yard visited Paul Gadd in prison in Vietnam and examined the hard disk of his computer which contained images of children involved in sexual activity.  The case had not been proceeded with in Vietnam because Gadd claimed in his defence that  he had borrowed the computer from a friend and there was no evidence that he intended to ‘widely propagate’ the material.
It is understood there is no plan to prosecute him in Britain for these offences.
Pictures: Andrew Chant