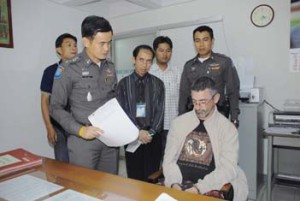 Irishman David Murphy, 42 from Dublin who has been arrested in Chiang Mai, Thailand for blackmailing a Bangkok based British businessman. In 2006 Murphy sent an email to the businessman with a video attached containing a trojan horse. He was then able to view the businessman’s emails and successfully demanded GBP30,000 in return for not sending the emails to his business rivals. Recently he demanded a further GBP75,000 but the businessman contacted police who arrested Murphy.