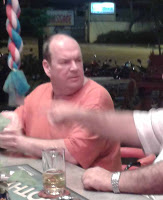 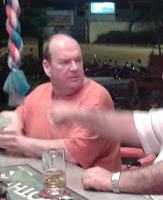 They say imitation is the sincerest form of flattery so you can imagine how delighted I was to see the birth of a new website called andrewdrummondbangkok.net. Obviously some financial wizard has bagged the name knowing it’s going to shoot up in value over the next few years.

Seems a bit like Drew Noyes, of the Pattaya Times, (re-invented in Thailand as a lawyer) buying up officialblowjobs.info except that one blew.

But then I checked (above) and my cherubic little face turned into a frown as I saw that the investor in my name was none other than the ‘Penguin’ – aka Neal Davies, a bankrupt fund manager (re-invented as a global property mogul.)

My disappointment was so extreme because Davies manages the Caldora Funds, which boast prime properties in the Caribbean and Thailand etc.etc. But these funds make more money for the managers if they go bust,they never had much property.and they are no longer trading.

I perused Bloomberg and found this chart for the Caldora Offshore Global Funds.  (Alright somebody perused Bloomberg for me)  and believe you me it takes quite some skill to lose so much money so quickly, unless you are of course diverting money into your private account.

Anyway above is a list of the Caldora Global Fund properties worldwide. Well pretty much all of them are actually ‘Harlequin’, except the Belair Panya Resort in Phuket,  and as such not built, in the same way many properties promoted by Harlequin bosses, David Ames (former bankrupt double glazing salesman re-invented as global property magnate)  and his former Thailand boss Richard Haughton  (former Tupperware salesman re-invented as global property magnate)  were not built in Thailand either.

And below is a list of their directors. Note Paul Anthony Gates.

Now read this from a rather angry Dr. Ahmed K Al Monsoori

Dr. Ahmed K Al Mansoori, of ECS – formerly Elite Capital Solutions, Dubai, is demanding to know from Paul Gates (imaginery former Royal Navy submarine commander turned insurance g.m). why the f**k was he siphoning off money and starting clone companies in south east asia….where of course Neal Davies, and his cohorts were operating in top gear selling dodgy investments to anyone, including elderly ladies, who would listen, while rolling around the bars of Phuket, running a company called Elite Capital Solutions or ECS Wealth.

The letter does not get any better. It gets worse

Since Davies was exposed on this site his two main cohorts have skipped  and Davies appears to be plotting revenge, not a new investment, hence:

As these guys have re-invented themselves they thought I must have too. Davies wrote a letter to the London Evening Standard asking whether I worked for them, and got a reply, after a new member of the newspaper looked at the staff list and could not find my name, saying I was not a member of staff and wrote for several newspapers. This of course is true, but he did not check with the Editor who else I was.

(Now of course I do not mean that in the context of some arrogant starlet telling a policeman ‘Don’t you know who I am?’. Its just that all working foreign correspondents in Bangkok are officially attached to at least one newspaper. And the execs at the Standard I have known for 30 years)

Davies then passed on this letter to Brian Goldie (former jail bird re-invented as Barrister of the Inns of Court and former Royal Marine officer) and Drew Noyes in Pattaya.

‘And yer honour I can prove he is not who he says he is!’

This was after he (falsely) accused me of allowing a comment saying his wife was providing oral sex to foreigners in Pattaya.

Drew Noyes
Actually I have refused to work as staff for any newspaper since I was on the picket line in 1986, although I accept commissions and contracts from most.

The London Evening Standard has renewed my accreditation as their correspondent for 2013 in the most complimentary of terms.

But isn’t this wonderful – Somehow Drew Noyes, Brian Goudie, Neal Davies, Richard Haughton, are now all linked. Can anyone come up with a collective noun.—a colony of c*nmen? a troop of tw*ts? a pride of pr*cks? Legal suggestions please. My apologies to first time readers of this site. You may not know all the names.  But believe me you’ll have fun googling.

I have not re-invented myself. I stick by the immortal confession of former colleague the late Peter Earle of the Empire News and News of the World on the doorstep of a lustful Vicar who demanded: “How do I know you’re from the News of the World?”

“My dear Reverend. I’ve admitted it haven’t I?”

Now read some rubbish here written by a financial journalist.