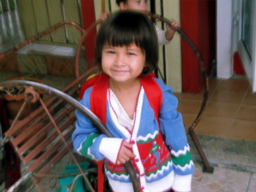 John Curtis President of the Australian charity ‘The Grey Man’ which has been accused of hyping the rescue of 21 Akha hill tribe children in Wawee District of Chiang Rai said he hoped to blow his critics out of the water.
But in the meantime ‘The Grey Man’ Facebook page has been shut down and the charity faces an investigation in Thailand by the Department of Special Investigations for offences under the ‘Child Protection Act’ and the ‘Computer Crimes’ Act.
Both the anti-trafficking group Trafcord and the Thai Ministry of Social Development and Human Security have completed investigations which say that the children were being looked after safely and responsibly at home and at school and that there was no attempt at trafficking them.
‘The Grey Man’ put up pictures of the children on his Facebook and internet home pages seeking funds to help the children whom the charity claimed had saved from certain sexual slavery and forced labour in factories in Thailand.
But John Curtis claims that the community was under ‘dire threats’ from the authorites, prompted by a rival Thai anti-trafficking n.g.o.
One girl had even been raped by a policeman before being returned to a brothel.
This video report carried part of an interview with John Curtis but the full interview is also linked below. There have been no edits in the interview, but we lost sound during the calls and had to reconnect.
John Curtis Interview Part One   John Curtis Interview Part 2

Anyway when I came back from up north I told Annie it was freezing at night up there. Next morning she got dressed up in her winter ski jumper, packed her satchel and told mum she was off with daddy to see the snow and sort out Father Christmas.