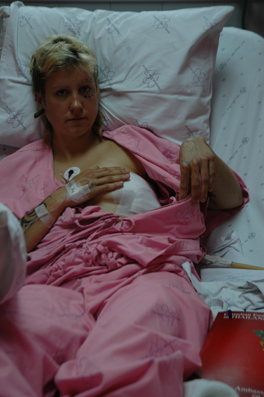 In a carbon copy murder similar to the police execution of two British backpackers in Thailand four years ago – a young Canadian tourist told yesterday how a Thai policeman executed her best friend.

Twenty-four-year-old Carly Reisig, from British Columbia, said the policeman who had no grounds at all for the attack –  shot fellow Canadian John Leo del Pinto in the head.

Then as he lay on the ground he put another bullet into his heart before the Police Sergeant Major turned his gun on her and shot her in the chest.

In both cases it seems policemen had been knocked to the ground by tourists and may have lost face. In both cases police claimed they had intervened to stop foreign couples quarrelling.

Speaking from her bed in hospital in Chiang Mai, Carly, from Chilliwack, British Columbia said that the policeman’s story that he intervened to break up a fight and that the gun discharged while they were fighting over it was totally untrue.

The shooting of the two backpackers had eerie similarities to the murder of Britons 23-yr-old Vanessa Ascott, and Adam Lloyd, 24, by the River Kwai in Kanchanaburi in 2004.

In that case Adam Lloyd was first shot then Vanessa was run over by Police Sergeant Somchai Wisetsingh in his car, before, as Vanessa clung to a pylon, he finished her off with bullets to her head, throat and chest.

Thai police have issued a statement saying that Police Sergeant Major Uthai Dechawiwat  had intervened to break up a fight between Carly and John Leo del Pinto, in the picturesque Thai northern hill tribe village of Pai on Sunday.
Case investigator Pol Lt-Colonel Sombat Panya said the couple had been drinking in a local pub called Ting Tong and had became involved in a drunken brawl after Del Pinto, who recently arrived in Thailand, found out that Reisig had become pregnant with a Thai man known as Fuen.
The couple continued arguing after they left the pub when Uthai arrived at the scene, near a bridge, on personal business. Uthai approached them and asked them to be calm but both foreigners turned to attack him.

The officer said Uthai was beaten to the ground by the couple. After managing to get up, Uthai pointed his service pistol to threaten away both foreigners, but Del Pinto tried to snatch the pistol from him. After a scuffle, shots were fired and the couple went down.
But said Miss Reisig:’There never was a fight. That is not true. John was my ex-boyfriend, but still my best friend. We had nothing to argue about. We had been drinking in the Be-Bop bar in Pai and were heading for a last drink at the Bamboo Bar near the bridge.   We were walking together. My Thai boyfriend Fuen was walking slightly behind.
‘A man came up to me on the road near Pee Dang’s Restaurant and hit me for no reason.

‘My face was painted with face paint, for fun, but I don’t know why he hit me. We had never met him before, never seen him before. We were unarmed and walking down the road after a good night out.
‘He was dressed in plain clothes, a white T-shirt. Leo shouted at him, ‘You can’t hit her!’ and pushed him away from us. Then the man went to his motorbike and got his gun, and Leo tried to get it away from him.

‘They had a struggle for the gun, then the man got control of the gun and stepped back and shot Leo directly in the face.

‘Leo fell to the ground and the man pointed the gun at his heart and fired a second shot. Then he turned around to me and aimed for my heart and shot me in the chest.

‘I blacked out and when I came to I saw Leo lying dead on the road beside me. My lungs filled up with blood and I couldn’t breathe.

‘I went to Pai hospital and then to a hospital in Chiang Mai. They had to put a tube into my lungs to drain the blood so I could breathe again.

‘I can’t believe that my best friend is dead and I got a bullet right beside my heart.

‘I have never been married, I am not pregnant. Leo was my ex-boyfriend from Canada. He had arrived in Pai a few days before to see me.’

Sitting by her bedside her boyfriend Rattaporn Varawadee, an artist nicknamed Fuen said: ‘Nothing we did gave this man the right to take lives.  We are angry now and we need help and a good lawyer.

‘We are shocked to hear that the policeman is already out on bail.’

Asked again if they had been fighting she replied: ‘Not at all, he was my best friend’. She had spoken to Del Pinto’s family and said ‘They are not doing well’

Suchart Pantai, the owner of Be-Bop bar said he saw the couple and Fuen leave his bar at about 1 am.  There was no fighting. But I heard from other sources that they were ‘play fighting’ as they walked.

Carly Reisig had been in Thailand for a year, leaving occasionally on visa runs. She had worked in Canada with physically and mentally handicapped people.

John Leo Del Pinto, also 24,  from Calgary, Alberta, was a former music student who earned a living as a promoter and concert organizer.

Pol Sgt-Major Uthai Dechawiwat has been charged with murder, manslaughter, and attempted murder but he obtained bail almost immediately after giving himself up.
Last night Graham Arscott, the father of Vanessa Arscott, 23, who was gunned down in Kanchanaburi with her boyfriend Adam Lloyd, 24, by Police Sergeant Major Wisetsingh said: ‘So sad. I feel so terribly sorry for this young man’s family.’