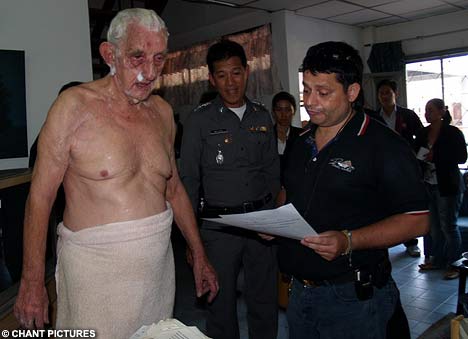 Maurice Praill, 77, formerly of Harold Hill, Essex, was arrested
yesterday while already on bail for two other child sex offences. But he
has been arrested in Thailand numerous times and been released.
Police in Pattaya said today they raised the bail to the maximum
amount allowed under law but Praill, known locally as ‘The Ghost’ was
able to meet the fee. They declined to discuss why he was given bail at
all.
Two years after his arrival in the late eighties, Praill married a
15-yr-old girl, the daughter of his maid, in a marriage seemingly
blessed by Buddhist monks. The girl fled after three months.
In December 2001 he was convicted of the rape of two young girls,
but the formal charge only came after a series of arrests in the resort
for which he was released after the local press reported he had paid
‘fines to local police’.
But after his conviction he was immediately released on bail, and
when he lost his appeal in 2004, curiously he got bail again to appeal
to Thailand’s Supreme Court.
In what child protection agencies describe as a ‘scandalous state of
affairs’ Praill was arrested again last year for abusing two girls aged
9 and 11 at his condominium in the resort but within two weeks was out
on bail again of Ãƒâ€šÃ‚Â£8000.
Child welfare agencies have long believed that a fund exists
subscribed to by an international paedophile group to pay ‘costs’ for
members arrested in Thailand
Praill was arrested at his new home in Bongkot Villa, Pattaya, after a
police surveillance team saw an eight-yr-old boy being delivered to his
home in a motorcycle side platform, normally used by the driver for
transporting goods to market.
Thai police were called in after a member of the Child Protection
Centre passed on complaints from the parents of the eight-year-old boy.
Praill, who was previously arrested for abusing young girls, had now
turned to young boys, said Police Colonel Khanisorn Yuwawithaya, who
led the latest investigation.
The police had been contacted by Supakorn Noja, of  the Pattaya
Child Protection Centre, said Commander Kanisorn. ‘We formed a team and
conducted surveillance. We witnessed the eight year old boy being
delivered to his house. We arrested Praill when he was in the shower at
his home in.’
Sudarat Sudarat Thailand’s National Child Protection Committee described the Praill case as ‘scandalous’.
‘He could have been abusing our children for twenty years yet nobody
has put him behind bars. I am shocked they have let him go again.
‘We have spoken to some of his child victims. They call him ‘The Ghost’ because of his frightening appearance.’
Britain, she added, had spent hundreds of thousand of pounds on much
publicized projects accompanied by Embassy cocktail parties to educate
the Thai police and justice system how to deal with child sex offenders.
‘This makes those efforts look very weak.  The Thai justice system
will have to take more notice of the safety of the victims and possible
future victims. He should never have been given bail. Paedophiles are
repeat offenders,’ she said.
Praill  ran a video hire company called Phoenix Entertainment based
in Chingford, Essex. His stepson footballer Jon Goodman, was capped for
Ireland and also played for Millwall and Wimbledon. He is believed now
to have cancelled all contact with his stepfather.
Praill’s lawyer, Nitiwat Pattanasarn, said: ‘Maurice Praill denies the allegations against him.
At his home in Pattaya after being freed Praill said: ‘It looks like
the police are targetting me. I blame the child welfare agencies for
targetting me. They are setting me up.  Yes I like young people.  I have
always had younger girlfriends.
Picture: Maurice Praill at his wedding to the daughter of his maid. He paid 40,000 baht. Then about US$1000.

A second Briton, named a Ronald David Wiener, aged 59, was
also relased on bail in Pattaya for sodomy in connection with another
eight year old boy, who was playing on the beach while his parents ran a
food stall. Wiener, from London, allegedly offered the boy the
equivalent of Ãƒâ€šÃ‚Â£12 to go with him The cases are not connected.
Police said he willingly admitted the offences and came to Pattaya
because he was told he could find young boys there. They also took away a
number of pornographic videos of young boys having sex.