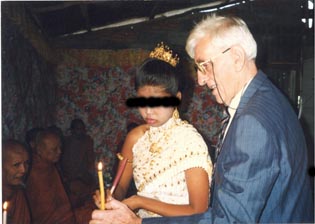 Police re-arrest ‘The Ghost’ – April 2 2008
From Andrew Drummond
Bangkok
Wednesday April 2 08
A convicted British child-rapist was back behind bars in Thailand today after police revoked bail after angry protests by a child protection agency.
Maurice Praill, 77, nicknamed ‘The Ghost’ from Harold Hill, Essex, was sent to Nongplalai prison, Pattaya, after Sudarat Sereewat a member of the country’s National Child Protection Committee complained ‘on behalf of the children of Thailand’.Praill had earlier boasted that a local policeman played the keyboards at his wedding to a 15-yr-old child bride in a ceremony blessed by Buddhist monks.

He will appear in court on April 7th on a charge of child sexual abuse with an eight year old boy where he is expected to ask for bail again.
Praill was convicted in 2001 and sentenced to 14 years in jail for the rape of two under-aged girls in Pattaya. But he never did time. He got bail to appeal against his conviction and when he lost his appeal in 2004, he was given bail again to appeal to Thailand’s Supreme Court.
He was arrested again last year together with three other foreigners and charged again with child sex abuse.  In this case it was alleged young girls were delivered to foreigners on the back of a motorcycle.  One of the alleged victims in this case was the daughter of Praill’s latest maid.
Praill was bailed. But the prosecution subsequently offered no evidence against him although an American was subsequently jailed for 16 years.
Then last month Praill was arrested for sexually abusing an eight year old boy. Again he was bailed, this time for 400,000 Thai baht (Ãƒâ€šÃ‚Â£6,411).
After he was released Sudarat Sereewat, also Secretary General of FACE (Fight Against Child Exploitation) protested to Region 2 Provincial Police, which covers the resort of Pattaya.
‘If we can’t put this man behind bars to protect our children, who can we (have detained)?’ she said.
Local newspapers in Pattaya have reported that Praill was arrested on allegations of child abuse even before 2001 but was released after paying local ‘fines’ at Pattaya Police station.
Shortly after his arrival in Thailand he went through a marriage ceremony to a 15-yr-old girl, the daughter of a previous maid. The wedding was blessed by monks and a Pattaya policeman played keyboards at the party claimed Praill, whose stepson Jon Goodman played soccer for Ireland, Crystal Palace and Wimbledon.
Praill, said he was surprised himself that he got bail. Nicknamed the ‘Ghost’ by children who describe his appearance as scary, he said after his release: ‘It’s incredible. How can an alleged offender who has committed rape against two young girls on four separate occasions ever get bail for that? And how could he get bail again? It could not happen in the UK, but it happened in Thailand which is comforting for me.’
The British Government has spent hundreds of thousand of pounds on courses for Thai police, social workers, and court officials, on how to deal with child sex offenders.
Most courses have been preceded by receptions at the Ambassador’s mansion.