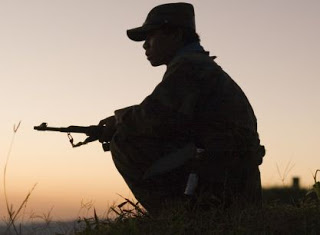 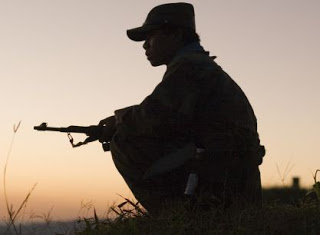 Despite moves towards
political reform, children continue to be recruited and used as soldiers by
armed forces and armed groups in Myanmar, a report published by Child Soldiers
International said today.
‘Chance
for Change – Ending the recruitment and use of child soldiers in Myanmar’, shows that nearly a decade since international engagement on the issue
first began and despite the signing of a Joint Action Plan to end the
recruitment and use of children between the Myanmar government and the UN in
June 2012, children continue to be present in the ranks of the Tatmadaw Kyi
(Myanmar army) and the Border Guard Forces (BGFs) which function under the
command of Tatmadaw Kyi and armed opposition groups.
Initial steps to implement the Joint Action Plan have
led to the release of 42 children from the Tatmadaw Kyi, with other
releases expected. However, measures to prevent future recruitment of children
have not yet been implemented and there are no programs yet to verify the
presence of children in the Border Guard Forces (BGFs).
This report shows that a persistent emphasis on
increasing troop numbers – accompanied by corruption, weak oversight and
impunity – has led to high rates of child recruitment in the Tatmadaw Kyi.
Hence, to be effective, measures to prevent underage recruitment should be
incorporated into the broader efforts to reform and professionalise Myanmar’s armed forces.
Strengthening the army and BGFs’ recruitment
procedures, introducing effective age verification mechanism to remedy
practices of age falsification, and, more broadly, addressing the incentives
that lead to underage recruitment require profound reforms to Myanmar’s armed
forces. Child Soldiers International recommends that international assistance
provided to Myanmar mainstream the prevention of recruitment of children and
their use in hostilities.
“Political reforms have led to some progress in the
security and human rights situation in Myanmar. The Myanmar government and the
international community need to ensure that protection of children in armed
conflict is provided the highest priority in this reform agenda,” says Richard
Clarke, Director, Child Soldiers International.
The report also makes recommendations in respect of
two armed groups, the Karen National Union/Karen National Liberation Army
(KNU/KNLA) and the Democratic Karen Benevolent Army (DKBA).  Despite
instructions by the leadership of both groups to end child recruitment, formal
and informal association of children with these groups continues, facilitated
by the absence of age verification mechanisms and the lack of access for UN and
other humanitarian
organisations. Recent ceasefire agreements signed between the
government and these armed groups could offer the opportunity for the safe
release of children, as well as the prospect of protecting children from future
association with these groups.
“The Myanmar Peace Centre set up by the government and
supported by the international community, is in a unique position to ensure
that protection of children is made an integral part of on-going negotiations
with armed groups,” says Clarke. “The opportunity to ensure durable protection
of children will be lost if these negotiations do not result in independent
access by the UN and other humanitarian agencies, which is a vital first step
to verify and release children from these groups and prevent future
recruitment”, Clarke added.
Source:Child Soldiers International
www.child-soldiers.org
Link to report