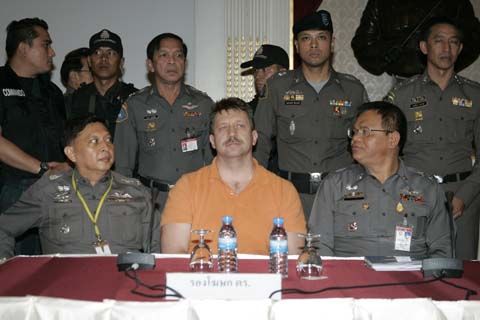 Unphased Victor Grout sits between wide-eyed Thai police: Picture:- Andrew Chant
He sat there in the same orange sweatshirt and khaki pants he had been wearing at the time of his arrest on the 27th floor of the Sofitel in central Bangkok.
And Viktor Vasilyevich Bout, 41, who name is usually preceded by ‘The Merchant of Death’ or ‘Lord of War’, looked as if he did not have a care in the world as he was paraded before the press at Thai police headquarters in Bangkok.
Nowhere to be seen was a mystery British national in his negotiating team released with four other Russians, who has since checked out of the hotel.
In a morning of back-slapping (the US. Department of Justice to the Thai Government, DEA Regional Director Thomas Pasquarello to his counterparts in the Thai police Crime Suppression Division) Bout sat nonchalantly by, though he may well have been kicking his shins under the table for being lured out of sub-zero Moscow to the tropical heat of the Thai capital.
Wedged between wide-eyed police officers Bout sat impassively his hands in cuffs on his lap hidden by a table.  Perhaps he has been reassured by the fact that Thai police have twice stated they will not let him leave Thailand until he has been tried here.
He had been in the Thai capital only four hours when he was arrested in an Executive Club meeting room which he had booked at his hotel with five colleagues and supposed representatives of FARC -Fuerzas Armadas Revolucionarias de Colombia.
Arriving on an Aeroflot flight at 10 am Thursday he was arrested at 2 pm while waiting for his guests to turn up.
‘The meeting had not even started when police walked in,’ a lounge waiter said today.
Actually his new friends were not representatives of FARC but agent provocateurs of the U.S. Drugs Enforcement Administration posing as such.
According to the Justice Department in Washington Bout and his colleague Andrew Smulian, who is on the run,  told DEA agents they had 100 surface to air missiles ready, plus helicopters and armour piercing rockets. He could drop them into Columbia by parachute.
And that was Bout’s speciality.  Using old Antonov aircraft from the former Soviet Union he had a reputation for moving weapons anywhere, anytime in areas where often one man’s terrorist is another man’s freedom fighter. He had seemingly an inexhaustible supply of Russian made war weapons.
He has been accused of supplying the Taliban, Liberian rebels, and other ‘terrorist’ groups from Sierra Leone and Rwanda and Angola to the Philippines, with a complement of dozens of aircraft and 300 pilots.
In the House of Commons, Peter Hain, called Bout a ‘chief sanctions buster and…a merchant of death’.
The Belgians have an arrest warrant out for him in connection with his deals in the Congo and he is allegedly banned from international travel, a ban seemingly not enforced.
On the flip side if there is one, his cargo operation has flow mercy missions for the U.N in Africa and his Sao-Taome based ‘British Gulf’ airline flew ordnance into Bagdad for the US occupation forces at a time when US aircraft were still being regularly shot at with Manpads, man portable air defence systems.
Defence experts in both the US and Britain claim he sold between US$30m and US$50m worth of weapons to the Taliban.
He is also accused in the 90s of running arms to former Afghan President Burhanuddin Rabbani, then under attack by Taliban forces.
One of his Iliushin-76 transports was forced to land by a Taliban MiG-21. Bout and Russian diplomats tried for a year to negotiate the crews’ release to no avail. On August 16, 1996 the crew overpowered their Taliban guards and returned the plane, plot enough for a Hollywood film.
Had he spoken yesterday Bout would probably have repeated what he said to Ekho Moskvy TV when he admitted delivering cargoes to Afghanistan saying  ‘What is shipped and how is determined not by the owner of the carrier but by those who arrange the specific shipment.’
Asked about U.S. accusations that he had sold weapons to al-Qaida and the Taliban, Bout simply denied it.
‘This looks more like a plot for a Hollywood action movie,’ he said.
Critics say the Hollywood movie has already been made and the character played by Nicholas Cage in ‘The War Lord’ is actually him.
In that film the U.S. government is continuously thwarted in its attempts to get the arms dealer.
Bout was lured out of Moscow because it was clear extradition from Moscow was not going to happen. His arrest is seen in some corners as a snub to Putin. Several countries have a claim on Bout including Russia itself. But in Moscow he was a most unwanted wanted man.
The US looks confident it would get the extradition it wants so much. But the longer he stays in Thailand the bigger the hurdles there will be.
An ominous message was given by Lieutenant General Pongpat Chayapan, head of Thailand’s Crime Suppression Bureau, who said Bout would have to face criminal proceedings in Thailand, a message stressed again yesterday by another top Thai policeman.
‘Mr. Swirly’ Christopher Neil, the alleged Canadian paedophile whose swirly image was unravelled and who was tracked down in Thailand last October on an Interpol warrant has yet to be extradited to Canada.
He has been charged in Thailand and the case could take years to complete sitting on just one day a month.
Pictures: andrew@andrewchant.com