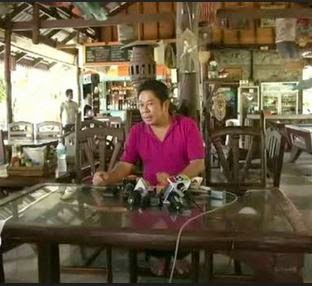 The Foreign Press corps has in the main put away its buckets
and spades and stopped digging on the island of Koh Tao..A smattering remains.

I say ‘stopped digging’ but there was not much
digging to do – not with the western population scared to open their mouths –
and even told not to on their community Facebook page –  and the
indigenous Thais who are able to talk blaming the horrendous crime on anyone but themselves.

The Daily Mail and the BBC’s Jonathan Head are holding out.
By tradition the man from
the Mail is always the last to leave.

Nine days after the badly beaten bodies of Hannah Witheridge
and David Wilson were found on Sairee Beach the Thai police are on the
defensive – and an influential island family boss has held a press conference.
Woraphan Tuvichian has offered a million baht (£20,000) if
someone who can prove a member of his family were involved. He has instructed
his lawyers to sue the newspapers for libel.
“The media coverage has ruined my reputation. I have friends
and people from a number of organisations calling me up to inquire on the
coverage. Everyone’s wondering of (about) these accusations. This continues to be a
really bad experience for me and my family”.
Private Eye’s ‘Glenda Slagg’ would have had a field day.
Of course one has to feel sympathy for wrongly accused
people but newspapers are not the source of the accusations which only referred to suspects.  And while members of his family
have been identified as possible suspects, they have now been repeatedly publicly exonerated – much more than say, some Burmese migrant workers…or Scot Sean McSAnna – but more of that later.
More to the point Woraphan Tuvichien is
seemingly totally oblivious to the westerners who were accused, and of course
to the Burmese migrant workers. Not only were the Burmese accused of being the
prime suspects but they were beaten by police according to reports reaching
here and already published in Irrawaddy Online;  proof again it seems of the
treatment of Burmese in Thailand – the subject of other libel cases on the go
being defended by human rights activist Andy Hall.
So now let’s see how the investigation is going, well, er at
least the Thai media one.
This from Thai PBS  television’s website. The Tuvichiens are
clearly so upset with Sean McAnna who fled their AC disco pub in terror, that
he appears to be now the main suspect. This may be because, as Wataphan pointed out “He portrayed our family as mafia.”
PBS

“Mr. Woraphan admitted that he did have a word with Sean as
he suspected that he may have been involved with the murder.

(Ah then it is your duty as one of the community
leaders to get to the truth Mr. Woraphan)
PBS

Mr. Woraphan said on the night of the murder, one of his
employees identified as Jok saw so much blood on the face and body of Mr. Sean,
so he helped to wash it out for him.

(Er, did not Jok ask Sean if  he had murdered and raped a
couple of westerners, or indeed how he had blood on his face?)
PBS

Later he found out that Mr. Sean looked very close to a
suspect on the CCTV footage, he then asked Sean about the blood and was told
that it was caused by accident.

(Oh he did, but only only thought about it later, after he had seen the CCTV. Was he murdering someone on CCTV or walking down the
street? And when exactly was Sean identified on CCTV? Come to think of it –  has he been identified on CCTV? – and when was he wiping off blood – at 4.30 am?)
PBS

He also said as the DNA testing revealed later the DNA
samples in the female victim’s body
belonged to Asian men, forcing his employee to be reluctant to give
further information to the police as they thought Sean was not involved.

(But of course he did not mention this to police because
they never asked.  Several days after the
murders police were too busy with Burmese immigrant and foreigners that they
still had not called in the village heads and their employees for
interrogation. His employer is one of the island leaders. Why would he not tell
the police?  So what changed their minds?)
PBS

Besides, as Mr. Sean was not captured in the CCTV footage,
and the police probe was going astray, he chose to stay put, he said.

(Yes that first thing you said about the CCTV does not ring very true does it?)
PBS

Meanwhile, a claim by Sean that he went hiding in a
convenience store on the island fearing for manhunt by his so-called mafias was
also partially true, was taken seriously by a TV Station. A check by television channel staff on the CCTV footage at
the 7-Eleven store showed he did enter the store but with no sign of fear as he
claimed.

(Partially true? This one takes the biscuit. Yes it’s true Sean McAnna went into the
convenience story because McAnna photographed his adversaries from behind a
counter. (And Montrivet Tuvichian has admitted following Sean to the
convenience store). But the CCTV file shows he has no sign of fear?  Now I have had trouble identifying a face let
alone what was one the guy’s mind viewing the CCTV files so far. Are you kidding me?)
So there you have it. It is quite clear that despite their
findings that the DNA of the killers is Asian, people can still find a way to
stick this on a foreigner.


DEJA VUE
But where have I heard this before?  Yes in Chiang Mai when police were
investigating the yet to be solved murder and rape of Kirsty Jones, 23, from Brecon, they tortured a Karen (Burmese) tourist guide with even more vigour than the cops
are alleged to have done on Koh Tao with their migrant population.
Narong Pojanathamrongpongse a tourist guide was essentially
kidnapped off the street by men in black, taken to a private house and
tortured.

This included beating and police attacks on his
testicles as they only know how. He was told to confess to save the image of Thailand and ordered to
masturbate. When he refused a policeman tried but failed to do it for him. Yes, I
know this conjures up an unbelievable image.
When that was revealed police continued their pursuit of
foreigners.
They had already accused an Australian called Nathan Foley and had
him trample all over the crime scene and they had banged up a New Zealander
Stuart Chrichton – though they had caught him with a small amount of drugs.
Then they banged up the owner of the guest house Andy Gill,
then 32, and his manager, a guy called Surin, who, would you believe in his
previous life as a monk used to hit on foreign women.
Anyway neither matched the DNA which was of course Asian,
and for want of repeating myself that did not seem to matter too much to the
original Chief Of Detectives, because he proudly announced that the murderer
could have easily slipped into town and bought some sperm off a ladyboy.
Of course if a westerner did that wouldn’t the ladyboy
remember?  I’m sure I would if some
stranger came up to me in the street and asked me for a sample. I think I’d have a plaque made to commemorate the occasion.
It actually took Dyfed-Powys Police officers in Wales and
the Home Office laboratory to get a complete profile of Kirsty’s killer.  But Thai police could not find a match…and
still cannot.
What is interesting though however is the Royal Thai Police’s
attitude to forensic investigation.
Twenty years on they are still asking
foreign police forces to do DNA testing.
Results here in short are not so precise but enough to eliminate
people.  Yet there is a well-equipped but
rarely used police lab in Bangkok (so foreign police told me but this was a while ago).
Bad?  No that’s good. Serious
forensic work is out of the control of the police as it should be.  If it were in their hands they could
introduce DNA into the crime scene at will.
If Sean McAnna fits the profile – he will of course be
examined by British police – and be extradited. Does not sound like the current
frame-up by innuendo will warrant it though.

But of course the attack now on Sean McAnna is likely to be a deliberate ‘red herring’ just as in the first place people connected to the island bosses were putting out stories that murderer was a jealous gay boyfriend of David Miller, and all the other stories.

Information has been coming into my office. It is very possible someone may talk to the military off island, if they have assurances of absolute protection.

Thai sourced allegations continue to refer to local families. Andy Lines, a reporter for the Daily Mirror penned his last story from the island this week. He referred to a mafia style ‘Omerta’ code of silence. I am afraid he is bang on.

And in my view there is every likelihood that a lot of people knew who the killers were from the very first day. Only the military can break the ‘code of silence’.